I have actually already been tagged once for this meme and talked about my current project Daughter of the Hunt, so when the darling Claire Legrand tagged me again, I thought it might be a good opportunity to tell you about the OTHER project that has been in the pipeline.  I was working on it concurrently during the month of September and some of October, but have put it aside temporarily to knock out DOTH during NaNo.

1) What is the working title of your book?

2) Where did the idea for the book come from? 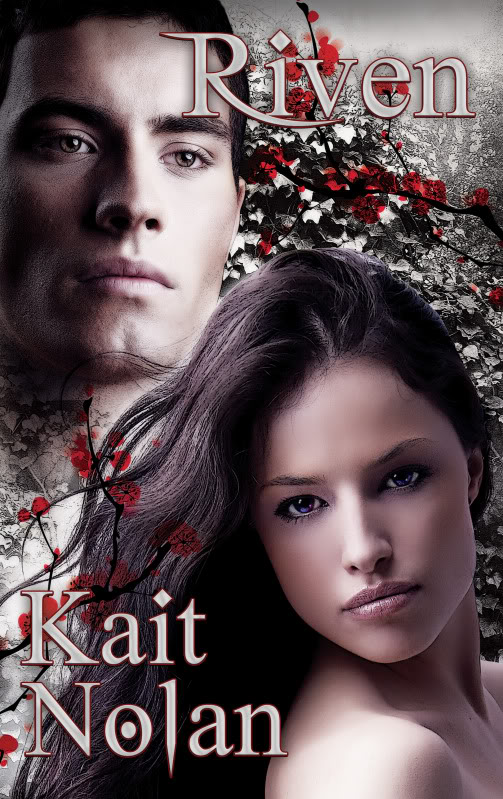 It came from an unused cover actually.  I had commissioned a cover for a Mirus novella two years ago, for a story about Orrin (the galvanic fae at the end of Forsaken By Shadow).  The series ended up going in a different direction (and that particular story suffered from an epic case of complicatitis), so I wound up not writing it.  But I’d already bought this beautiful cover and I hate for things to go to waste.

Cherry blossoms featured prominently in the original story, so they were a prominent feature on the cover.  I got to mulling one day about the cherry blossom festival in D.C. and the heroine from my very first (never to see the light of day) Mirus novel, and I started wondering what new kind of hero I could pair her with.   Riven means to rent or split apart, and I started wondering about a soldier, loyal to the Council, who must split himself off from the world he believes in to protect the woman he loves.  And that’s where this story came from.

3) What genre does your book fall under?

4) Which actors would you choose to play your characters in a movie rendition?

He’s actually not quite right, but I can’t think who would be and I’ve already spent SO MUCH TIME on this search…and I liked him in his role as Ben on Covert Affairs.

5) What is the one-sentence synopsis of your book?

Injured in the line of duty, ShadowWalker Jack Ryker has been put out to pasture manning a Council safehouse–or so he thinks.  On the verge of taking a command post, he discovers his replacement has inadvertently endangered an innocent human woman Jack saved from a mugging.  Driven by honor and something he chooses not to analyze, Jack must risk his career, his reputation, and his life to keep her from falling prey to the Hunter assigned to end her life.

6) Will your book be self-published or represented by an agency?

7) How long did it take you to write the first draft of your manuscript?

Still working on it.  I hope to knock it out by the end of my holiday vacation.  It’s either going to wind up a long novella or a short novel (it’s right on the cusp).

8) What other books would you compare this story to within your genre?

I think this would appeal (obviously) to fans of my other Mirus work.  Also to those who love Nalini Singh’s Psy-Changeling novels.

9) Who or What inspired you to write this book?

I wanted to go back to my Mirus world but to see some new characters that aren’t directly tied to the ones I’ve introduced in previous work.  Not that I’m never coming back to them, but I needed to set up some other aspects of the world and another Underground cell that will play a part in things to come.  Kind of like how Nalini Singh spends a lot of time separately with SnowDancer and DarkRiver.

10) What else about your book might pique the reader’s interest?

So far all of my Mirus romances have been about those who are part of the Mirus world.  This one has a hero who crosses the line for a human woman.

Now, since the rules of this meme are for me to tag five other writers, who will then talk about their WIPs, I hereby tag the following ROWers:

2 thoughts on “The Next Big Thing: Riven”