This is Aurora, a steampunk indie film that was the WINNER – BEST ACTION/ADVENTURE FILM – Comic Con International Independent Film Festival 2013.

After his wife is kidnapped by a group of slave traders, Emerson Marks, captain of the airship ‘Aurora’, must fight against all odds in order to rescue her.

That sent me off on a YouTube quest for more.  That led me to the steampunk web series Dirigible Days.  It’s not as high budget or quality as Aurora but it was still entertaining if you’re of a steampunky bent.  There are 5 episodes in the first season.  Here’s the first one. 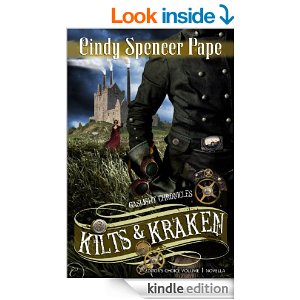 And of course my steampunk obsession would not be complete without BOOK recs.   While I have been impatiently waiting for the release of Meljean Brook’s The Kraken King, I have discovered Cindy Spencer Pape’s Gaslight Chronicles series.  I started entirely out of order with Kilts and Kraken, which I LOVED (the stories are stand alone so it doesn’t seem to be an issue of you read out of order).  The worldbuilding isn’t as deep and detailed as Brook’s Iron Seas series, but sometimes you don’t WANT super deep world building (because, awesome as it can be, it takes mental energy to keep up with).  This was delightfully light, funny, and entertaining.  Her novella Photographs and Phantoms is currently FREE on Amazon.