I’ve been getting increasingly sporadic about posting.  Some of that is that I’ve been blogging for 8 years, and after over 3100 posts, you start to run out of stuff to say that you don’t feel like you’ve said before.  Some of it is that I’ve been super busy with the Evil Day Job this summer, doing a lot of travel since May (and a lot of organizing of meetings of lots and lots of people, which is very time-consuming).  Some of it is that I got consumed with finishing Know Me Well because I was three months past my personal deadline (and ended up with a novel a solid 41k longer than the novella I set out to write).  When I get to the end of a book, EVERYTHING slides.  It’s why the first day or two after finishing a draft are dedicated to digging out the house, laundry, and my office at work.  And some of it is that as I’ve gotten older, I have developed an increasing appreciation for silence.

Silence is a limited commodity in our world these days.  I heard a really fascinating story earlier this year about how silence is an endangered species.  About how there’s almost nowhere in the world you can go to get away from all the manmade noises of roads or airspace or a zillion other things.  I thought about that on my walk the next morning at dawn.  The sun was barely creeping over the horizon and the grass was crunchy with frozen dew (dear God, I can’t wait for fall)–and even then, I could hear people driving on the main road outside our neighborhood.  It’s a country road but still a main thoroughfare into town, and even at that ungodly hour, people were on it.  That was a sobering thought. 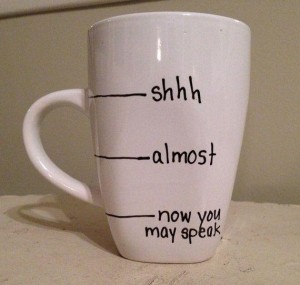 We are bombarded with noise–literal and mental–from the moment we roll out of bed.  Social media, email, voicemail when we get to the office, phone calls, meetings, people.  Given the choice, I like to ease into all this.  There is little that makes me more crazed than having to deal with people right after I get up.  I’m not a morning person AT ALL.  [I need this mug in a big way].  Earlier this summer, my boss and I had to leave at 6 AM for a meeting in the northern portion of the state.  She started talking as soon as we got in the car (not necessarily to me–I think there was a conference call going on, if I remember), all the way up there, all through the meeting and presentation, all through lunch with people after.  By the time we got into the car at 2:30 for the drive back home, I was absolutely fried and had to pull out my headphones and slap some nice neutral rain and ocean waves on my phone for the 3 hour drive back.  If I had to deal with that every day, I’d go absolutely starkers [that’s British for nuts–the Brits have the best slang].

My husband and I just joined a gym recently (it’s been nine years since I worked out in a gym and not at home), and I started going on Tuesday this week.  It’s one of those with 24 hour access (a novel concept for me).  The routine I’m getting into means getting up at 5:45, feeding the pups, taking them on our usual 1.5 mile walk (too damned hot for any longer right now), then heading into the gym to lift weights, work on forms, and jog (I’m starting C25k over again).  Then I clean up there, have my protein shake on the drive to work, and finally have my cup of tea when I get there.  Now, it’s worth noting that my husband is on night shift these days, so I don’t see him in the mornings when I do this.  This means I get up at 5:45 and I don’t actually have to speak to a soul (usually), until about 8:45 or later.  It’s GLORIOUS.  One day this week, I saw a guy leaving as I was getting to the gym (polite nod) and another girl as I was hitting the showers.  Otherwise, I was COMPLETELY ALONE in the whole damned place (and it’s big).  This was both awesome and felt like the setting for a suspense or horror scene (because this is how my brain is wired).

I’m not one of those people who has to have the TV or music on when I’m by myself.  I really don’t understand those people who are afraid of the silence.  Or maybe it’s that they’re afraid of their thoughts?  I don’t know.  In the evenings, after my husband leaves for work, the TV goes off, and at most, I’ll have MyNoise.net on with some kind of nature sounds (just because it seems to help me focus), while I write.  And maybe that’s part of why I appreciate silence–because I do a lot of thinking.  Workout out plot details, character arcs, the right way to build a romance.  At any give time, I usually have at LEAST 3 or 4 plots cooking in my brain.  There’s little more annoying than being on the cusp of figuring something out, or having a few perfect lines of dialogue that you need to hang on to until you can get to a keyboard or paper, only to have somebody come and start talking at you about something entirely inane and unimportant and completely derailing your train of thought.

This post is weaving drunkenly all over the place.  When I sat down, I was going to talk about looking for recipes, but I guess I got off on a tangent because I am surrounded by sleeping dogs and enjoying my morning cuppa in the quiet–appreciating silence before I dive into the day’s words.  Anyway, I guess my point at the beginning was that I haven’t much felt like adding unnecessarily to the noise out there lately.  I’ll blog when I have something worth saying–or when I feel like rambling into the void.