I have recently become addicted to Lifetime’s Cook Yourself Thin.  These women eat so horribly before the show that they all wind up losing a dress size in 6 weeks.  My own eating habits aren’t that bad, but I am always interested in checking out lower fat, lower cal versions of faves.  One of my top favorite foods is spaghetti carbonara.  The low fat version I usually make is from Quick Fix Meals with Robin Miller, and while tasty, it bears no resemblance to real carbonara.  There aren’t even any eggs!  But this recipe from Cook Yourself Thin is actual traditional carbonara with the eggs and bacon.  It’s just lighter.  My only gripe is that it just doesn’t make 4 servings.  I know they’re all about portion control but I like pasta darn it.  I call it 3 servings.  So without further ado, here’s my entry for this week’s Presto Pasta Roundup, hosted by Kitchenetta of Got No Milk. 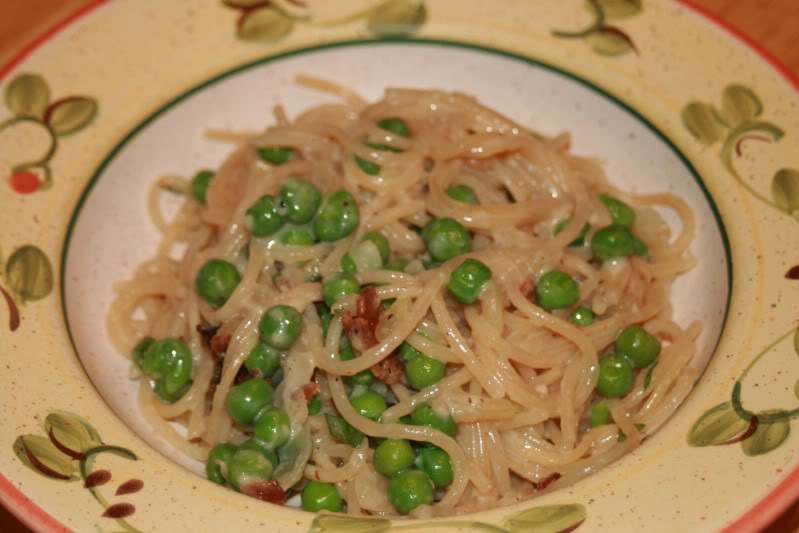 1.  Cook the bacon in a large skillet over medium heat, turning occasionally until browned and crisp, about 6 minutes. Drain pan and dry bacon on paper towels; keep the skillet on the heat. Add the oil and onion, and cook, stirring occasionally, until softened and translucent, about 3 minutes. Remove from the heat. Whisk together the milk and egg in a large serving bowl until well combined. Stir in the onion.

2. Bring a large saucepan of salted water to a boil. Add spaghetti, and cook according to the directions on the package.

3. Two minutes before the spaghetti is done, stir in the peas. Drain and immediately transfer to the milk mixture. Toss until the pasta is well-coated. Add the cheese, parsley, 1/2 teaspoon salt and 1/4 teaspoon pepper, and toss well. Crumble the bacon into small pieces over the spaghetti, and toss. Serve immediately.

This works out to what I consider THREE servings at 503 calories and 12.6 grams of fat.