I know.  You’re all so shocked to hear it.

Our house has been on the market for 9 days.  It has shown 6 times.  Still no offers, though all the realtors agree that our price is competitive, and we’ve done everything under the sun to make it attractive, appealing, and fully up to date.

The house we’re trying to buy has been on the market for 15 days.  It’s shown…a bunch of times.  We are, so far, the only offer.  But until our house is under contract, someone could still come make an offer, putting us in the position to close in three days or walk away.

Sigh.  It’s stressful and frustrating.  We don’t want to lose out on this house.  But we are in the position of MOST people, in that we have to sell this one before we can close on the other one.

I’ve been comforting myself with all the stuff the sellers did wrong.

Mostly it’s all paint, which we’ve done before and aren’t bothered by doing again.  Most buyers really don’t want to do ANYTHING to a property, so that’s in our favor.  The house looks REALLY small from the front (it’s a very deep house), so many folks will just drive on by.  And did I mention the TOTAL lack of curb appeal?

It’s not a deal breaker for me because it can be fixed, but it bugs me.  I’ve been dreaming about what we can do to make it pretty (short of having big stuff done).  I’m pretty sure I’ll be painting the whole thing, adding shutters, building window boxes, repainting the front door, changing out exterior light fixtures, and doing some landscaping, right off.  And eventually we want to build a pergola on the patio side, possibly a porch along the front. 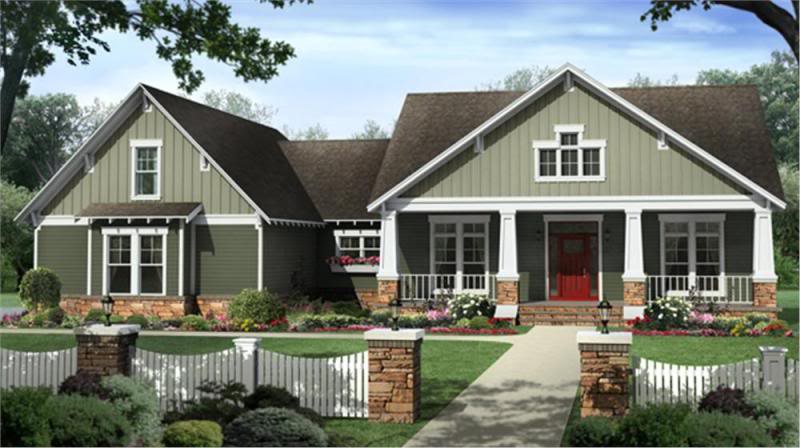 I really love Craftsman style houses, and this one could be adapted to sort of follow that theme.  We’ll definitely be hitting those color palettes for the exterior (probably interior too–love those colors).  I’m thinking a silvery green for the body of the house, bright white accents, black shutters, and a deep rusty red door.  Then some pretty cedar trellises with some Carolina or confederate jasmine in big reddish pots. Kind of like this.  The house looks NOTHING like this one, but this sort of color scheme is what I have in mind.

We shall see.  It’s a game of hurry up and wait.