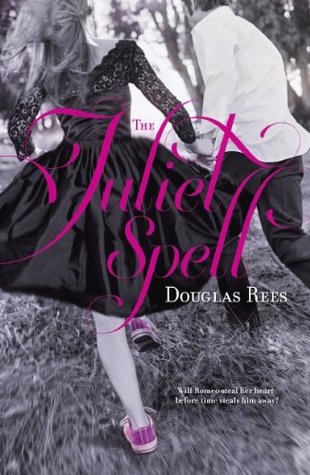 I first heard about The Juliet Spell a few months ago while eavesdropping on a Twitter conversation between my agent, the Magnificent Laurie McLean and former Harlequin Teen editor Adam Wilson.  I can’t remember the descriptors they used, but they had me at “Shakespeare” and “time travel”.  There might have been reference to Glee.  I’m a sucker for retold Shakespearean plays and I adored Shakespeare In Love, so this was a must read for me.

Here’s the blurb from Goodreads:

I wanted the role of Juliet more than anything. I studied hard. I gave a great reading for it-even with Bobby checking me out the whole time. I deserved the part.

I didn’t get it. So I decided to level the playing field, though I actually might have leveled the whole play. You see, since there aren’t any Success in Getting to Be Juliet in Your High School Play spells, I thought I’d cast the next best-a Fame spell. Good idea, right?

Good thing he’s sweet and enthusiastic about helping me with the play…and-ahem-maybe a little bit hot. But he’s from the past. Way past. Cars amaze him-cars! And cell phones? Ugh.

Still, there’s something about him that’s making my eyes go star-crossed…

I absolutely felt myself transported back to high school and my theater days (not that I can act…I was totally in the chorus for whatever our musical of the year was).  Rees absolutely captured the feel of a high school or community theater production–the tensions between cast members, the crushes, the arrogant-I’m-better-than-this-but-I’m-stuck-here director.  And it’s against this backdrop that we get to see Miranda Hoberman scramble to make the time traveling Edmund Shakespeare fit in to the 21st century–while trying not to fall for him.  The cast of the book is enjoyable, with several faces that I swear I went to high school with.

It’s not my usual action-packed, butt-kicking kind of read, but it was great for a change of pace.   I thought this book was a great deal of fun, and–if I may make a wholly un-PC statement–I would never have expected a YA book by a guy, with a first person female heroine that I actually bought and related to.  So, hat’s off Douglas, this was a very enjoyable trip.  Those who enjoy light, contemporary YA, with just a hint of magic should find The Juliet Spell right up their alley.

3 thoughts on “Fiction Friday: The Juliet Spell by Douglas Rees”