Welcome to the first installment of Mix It Up Monday, where I highlight some of the recipes I’ve tried from other fabulous food bloggers.  I came across this recipe for Crock Pot Gyros at A Year of Slow Cooking.  Now I love Stephanie’s blog because they are also a gluten free household.  Gyros are a favorite of mine and something I rarely get because we don’t have a Greek restaurant in town (well, there’s one, but they’re more interested in being a bar and their gyros are gross).  And we all know I adore slow cookers, so I knew as soon as I saw it that I HAD to try it.

The original recipe uses half ground turkey, half ground lamb.  I’d intended to make mine entirely with lamb, but lamb is hard to come by in my small town, so I wound up going with ground beef.  And because the stretch between lunch and dinner is considerably longer than the 4 hours on low recommended for this recipe, I did as Stephanie did and cooked mine on high for 2 hours.  The only other change I made was that I merely sliced my onion in half and used it to sort of suspend my gyro loaf above the bottom of the crock pot, which allowed the excess grease to drip out. 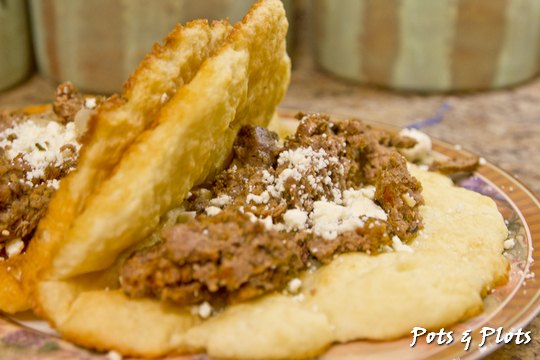 The Verdict: This was really super delicious.  Hubs, who isn’t often a fan of Greek style food, loved these.  Stephanie used corn tortillas with her gyros.  I made gluten free flatbread for mine and sprinkled just a bit of feta.  The combination was AMAZING.  We split the entire batch between the two of us and agreed that was a bit too much food, even for us.  So I say this recipe easily serves 4 with some kind of side.  If there’s just two of you, you could save the second half of the gyro meat and make a Greek style pizza the next night.  I know that’s what I’d like to try!  We call this a keeper.

One thought on “Mix It Up Monday: Crock Pot Beef Gyros”