One of the things we missed the most when we switched to gluten free life is Chinese dumplings or potstickers.  The ones we love are absolutely a labor OF love, backbreaking and time consuming and SO WORTH IT.  Given the easy tearing nature of gluten free dough, I thought that they were out of our reach.  Then I found The Gloriously Gluten Free Cookbook, which I bought expressly because there was a recipe for potstickers listed in the index (pg. 114).  It’s taken me months to get around to trying it.

I had a few issues with this recipe.  For one, it calls for SIX EGGS in only 24 dumpling wrappers.  That’s ludicrous.  I found the dough incredibly difficult to roll out, and of course it didn’t really stretch.  Once I finally got the dumplings wrapped (and I used my original filling from the recipe linked above), which only used half the filling btw, I followed the cookbook’s advice for how to cook them.  Promptly burned the entire first batch (about half the dumplings).  Went back to cooking them the way that I cooked my regular dumplings and those turned out better.  The wrappers themselves were a little bit gummy and thick, not unpalatable but not at all what I associate with dumplings.

I’m thinking I’ll be continuing the hunt for a viable gluten free dumpling wrapper, but this was enough to give me hope that it CAN BE DONE! 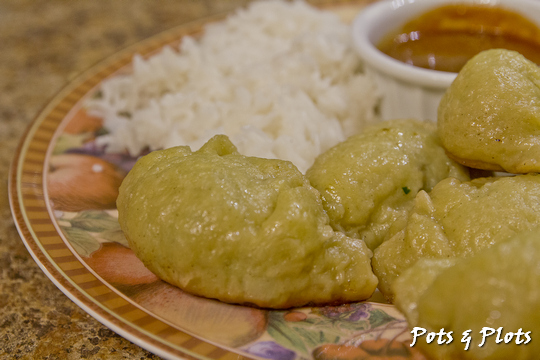 Now, as I said, I had the other half of the filling remaining to do SOMETHING with.  So for lunch the next day, I chopped another 3 scallions, finely diced another 3 leaves and stalks of bok choy, added another teaspoon of tamari and a 1/2 teaspoon fresh ginger, and sauteed the pork until cooked through.  Then I pulled out the package of rice paper wrappers I bought FOREVER ago and forgot about, soaked them according to package directions and filled each one with 1/3 cup of filling and rolled them.  I brushed them all with oil and baked them at 425 for 20 minutes.  They were quite tasty as a gluten free alternative to egg rolls, though definitely flimsier.  They kind of fell apart when we ate them, but it was still a tasty and simple use for the remaining filling. 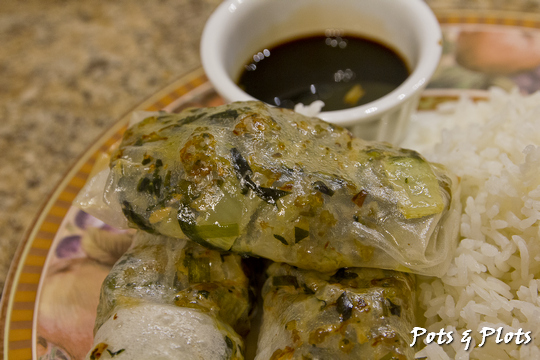