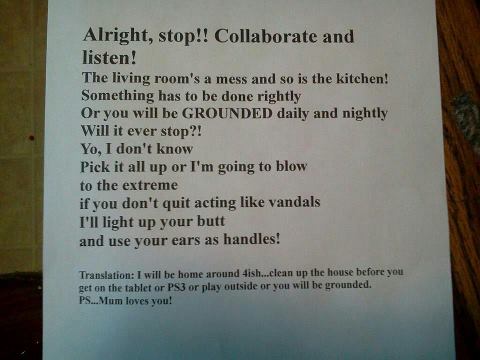 Okay first off, I just have to share this thing my husband sent me.  This is the BEST parental reminder EVAR.

Granted, given the generational gaps in music, possibly the teen wouldn’t even get that, but props to Mum for creativity!

Second, did you know that there’s now a Wii app for Amazon Instant Video?  They’ve had Netflix and Hulu forever, but when I went in to update this morning, I saw Amazon Instant Video.  I know a lot of folks have multiple systems (we watch AIV through our Xbox), but a lot of folks (particularly those with young kids) have the Wii, so I thought it might be a good thing to tell peeps about.

So, now, the update.  I did not write Saturday, Sunday, or Monday.  Saturday and Sunday I was just flat busy.  We had a really full social calendar this weekend and there was epic cleaning involved (one of those These People Are Seeing The House For The First Time cleans) and a LOT of cooking.  Monday I got side tracked by this whole notion of writing for fun.  I dove back into my idea file to see what I had in there that might tickle that fancy–something I’d come up with but that didn’t fit the parameters of my current publishing plan.   And there was one project that was originally intended to be a component of a joint venture with Susan and some others that’s never going to happen (she folded hers into another book and everyone else dropped out of the project).  It was a project I never could settle on being YA or adult because I really wanted it to be about early 20 somethings.  This was before NA popped.  So I ended up spending Monday pulling all my notes from that, reviewing them, organizing them, and solidifying a bullet point outline.  And then Tuesday I finished up my abbreviated toolkit.  Sue me.  I can’t pants anymore.  The whole idea of it makes my eye twitch.

Susan’s pretty convinced she’s broken me.  I used to be an inveterate pantser.

Anyway, I finally sat down to write yesterday afternoon after the AC guy left (we were low on freon, which was causing the coil to freeze).  I’d been stuck in this confrontation scene and hadn’t been able to move on.  Finally sorted it yesterday, plowed through just over 1600 new words and was able to knit together bits and pieces from previous incarnations of these scenes, such that I’m actually 3 scenes further than I was when I started.  I’m sure it’ll need further smoothing in revisions, but the content is there and I’m MOVING ON.  Four and a half scenes from the end.  I’m feeling the momentum and getting excited.

I want to finish the next scene and a half this week.  That gets me up to the start of the big battle scene, which I’m going to have to do some planning on to make it as epic as it needs to be.  That should also get me up to the weekend.  Saturday we’re shooting a wedding, and Sunday is, of course, Mother’s Day.  So probably won’t be any writing then.

In other exciting (for me) news.  Susan figured out how to turn on word count in Evernote, so that it shows the wordcount at the bottom of each note.  At which point she started laughing because she KNEW I would absolutely be immediately figuring out how I could add that to my tracking spreadsheet (which I did).  :pets the spreadsheet:  I’m a social scientist by training.  We like data.  Just accept that this makes me adorkable and move on.

17 thoughts on “Midweek #ROW80 Check-in and Did You Know There’s Amazon Instant Video For Wii?”