I’m home unexpectedly today for a snow day.  For which we have not actually seen any snow.  We’re in that borderline range of 32-33 degrees where all the weather apps say snow, but it’s really more like freezing rain and is just generally nasty.  They were predicting 3-6 inches of snow.  And maybe it’ll turn as the temperature drops.  Who knows.  I’m just happy to get an extra day at home in the middle of the week. 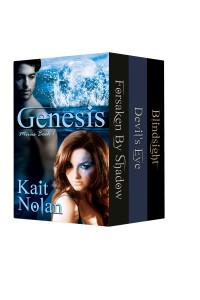 This morning I’ve been designing a new boxed set cover for my Mirus omnibus Genesis.  It’s one of those things I’ve been meaning to do for a while because a lot of buyers don’t bother to read the description that clearly states it’s an omnibus of other work–and then they get mad because it wasn’t a new novel in the series.  Plus boxed sets are a Thing these days, so I might as well get in on that.

I haven’t got much progress to report on fiction this week because I’ve been writing another writer’s class.  This one is on writing novellas.  That’s a length I’ve done often and I’m quite comfortable with, and it’s become a really popular length again since the advent of ebooks.  Since I’ve got the time, I’m planning on recording that this afternoon.  More on that when it’s available.

I’ve met or surpassed my goal for recipe posting this round.  Now that I’ve got the blogs merged and everything all in one place, it seems easiest to just make a weekly feature with a recipe.  This week’s was a to die for, gluten free, dairy free chocolate peanut butter lava cake.

I’m not going to attain all of my goals this round.  We only have a month left and I’m nowhere near finishing She’s Got A Way since it turned into a full novel.  But I hadn’t set a goal to write a cookbook or a class, both of which I’ve done this round, so I got different things done.  I’m doing my best to focus on the process as much as the end result.  As long as you keep DOING STUFF, it adds up and the results eventually come.