I’ve been thinking a lot about failure lately. 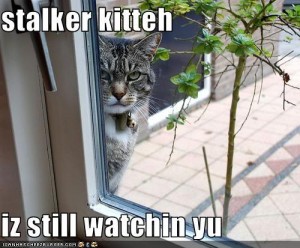 It seems as if it’s haunting me at every turn, skulking along waiting to ambush me in every arena of my life like some kind of apex predator stalking its prey.

I had amazing word counts last year.  Very few days of low or no productivity–only 71 non-writing days the whole year.  This year I’m already at 23, and we aren’t even a third of the way into the year.  I’m already a good six weeks behind my self-imposed schedule, which is half my fault, half the fault of the characters in this current book, who simply wouldn’t rest until I gave them a novel of twice the word count they were allotted (they were SUPPOSED to be a novella and released by now).  This doesn’t bode well for the lofty goals I set for my productivity this year.  Which, hey, I am the champion of preaching the idea that sometimes life happens, and don’t let it get you down.  That’s the entire philosophy behind why I founded A Round of Words in 80 Days.  Some days it’s really hard to practice what I preach.

On the Evil Day Job front, I’m currently in the midst of a project that’s very different from what we usually do in that it’s an epic collaboration between multiple universities across the country.  Which means that every blessed thing is done by committee and there are too many people that have to agree to make a decision.  It’s every school group project I ever hated, on crack.  I was on a conference call last week where they spent FORTY FIVE MINUTES debating about the components of the participant ID number (should’ve been a 5 minute decision).  And then someone said, “Hey y’all, productive meeting!”  God save me from the inefficient.  Pretty sure I’ve had a permanent eye twitch since this project started.  Part of the reason I normally rock my job is that I have no problems making a decision and getting things done.  Given I have zero control over things with this project and don’t have the authority to make those decisions, I’ve spent a lot of time feeling like the village idiot (not a role this type-A overachiever is accustomed to).  I’m definitely not alone.  Everyone ELSE on my team is in the same boat, but it’s incredibly frustrating (and has, probably, been somewhat contributing to the mental fog and poor attention that’s afflicting the writing side of my life).

But perhaps nowhere am I feeling the fail more than Operation Goddess In Training.  I have simply been unable to get back into a proper fitness routine since Christmas.  There’s been illness and injury that have meant I had to take it easy.  But more than that, I just can’t get myself out of bed early in the morning.  Getting up at 6 a.m. has become this Sisyphean task of trying to escape the tractor beam of my mattress–and the mattress totally wins most mornings.  It’s like I’m caught in this loop of inertia.  I had JUST managed to pull an ENTIRE WEEK of getting up on time, and then the #$^%^#$@$^#^ Daylight Savings Time started and screwed things up all over again.  The moment DST starts, my quality of sleep goes down because it’s further off my natural body clock.  I can’t go to sleep on time and then I can’t manage to get up in the PITCH BLACK DARK.  I require THE SUN to wake up.  That is the signal to my body that, yeah, okay, the day has begun.  If it’s still dark outside, my brain is like “Go back to sleep.  Nobody sane is up right now.”

Other than my taekwondo class, which is the ONLY thing I’ve been consistent with (apart from illness), I’ve been inactive long enough now that I’ve slid into just FEELING ICK.  One of the frustrating things about fitness is that you have to do a fair amount of pulling a Nike (Just Do It) whether you have energy or not, to get into a place where you actually HAVE energy.  It’s like that adage in business that you have to spend money to make money.  Given that willpower is a finite resource, that is a big is part of why it’s so flipping hard to make those kinds of lifestyle changes in the first place.  Add to that the fact that we have had gray and some form of wet precipitation for THREE STRAIGHT WEEKS, and I’m getting an epic case of spring fever on top of everything else.  I would LOVE to start Couch 2 5K again, just to change things up–but it WON’T STOP RAINING.  MAKE IT STOOOOOOOP.

But I don’t say all of this just as a general bitch session about the current state of affairs in my life.  It’s more as illustration of some really negative thought patterns that I think we are ALL prone to falling into at one time or another, and I wanted to try and articulate the tactics I use to break them.

8 thoughts on “5 Ways to Combat Failure”