My weekday breakfasts are pretty staid and dull.  Slice of whole grain toast, 1 egg + 1/4 cup of egg whites, scrambled, and hot tea.  It’s fast, relatively filling, and under 200 calories.  When you’re on a limited calorie budget of 1,300 calories, that’s important.  But weekends I sleep in (praise God) and that means I often wind up skipping breakfast or lunch and only having 2 meals in a day.   That means I can have something a little more substantial for a weekend breakfast.  As hubby and I were talking about corned beef hash this morning, my brain took off on a tangent of hash in general, and I decided to throw something together that’s redolent of Rachael Ray’s Cowboy Hash (but healthier).  I had inspiration from a cheesy sort of southwest has in the latest issue of Simple and Delicious (there were a lot of good recipes this month!) and came up with this healthy, very hearty and filling breakfast hash that comes in at 367.5 calories ant 17.35 grams of fat (serves 2).   Who said veggies can’t be good for breakfast?  Oh wait…that was me.  Guess I was wrong! 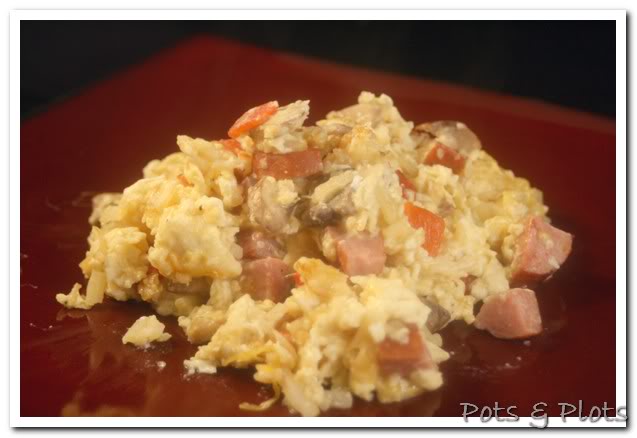