Hubby has had a bit of breakfast ennui.  He’s tired of muffins, tired of the sausage biscuits.  So we’re moving on to breakfast burritos.  I recently read The Glycemic Load Diet (as I think hubby has insulin resistance), which made sense as far as the condition it was describing but is an utterly unrealistic diet and was clearly written by someone who knows nothing about food as a foodie (no foodie would call bread, pasta, and potatoes tasteless paste).  In any event, I adapted a recipe I found in there (that didn’t even bother to mention what size tortillas it called for), and doctored it to taste like, you know, real food.  We were aiming for something high protein and more filling than what he’d been eating for breakfast that would tide him over longer on his 12 hour shifts.  This makes 4 burritos at 414 calories and 28.5 grams of fat.  They’re worth 10 points on Weight Watchers if you’re counting.  He’s a MAN so of course he gets a lot of points.  If you wanted to lower the point value, you need only replace some of the eggs with egg whites or Egg Beaters and swap out some or all of the meat with other veggies (like peppers and onions).  You could also go with turkey sausage without problem I think.  Please excuse the totally uninspiring photo.  I was using my iPhone. 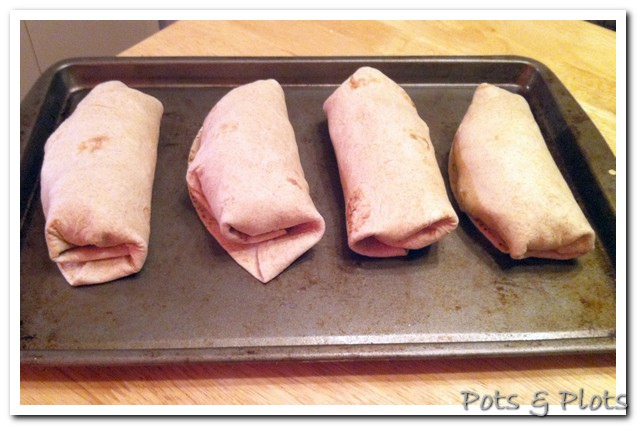