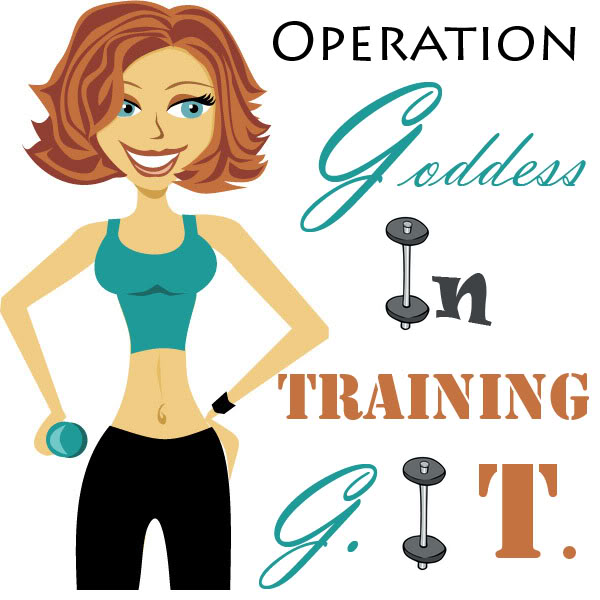 Well I haven’t done an Operation G.I.T. update in a while, so I figured I’d talk a little about how that’s going as we enter the Season of Temptation.  I survived Halloween, thank God.  I managed not to buy more than that one initial, tiny bag of candy corn.  There was party eating, but I came out on the other side of that.  Next up: Thanksgiving.

One of the things I’ve been working on is getting back into weight training.  I started weight lifting when I was fourteen and fell in love.  I did it consistently for years until I got out of grad school and no longer actually went to a gym.  I was fit, strong, and lean.  All you women out there who think you can’t lift weights without bulking up–LIES.  Women don’t bulk.  It’s not how our muscles operate.  Women DO NOT BULK unless they try really hard to do exactly that.  Heavier weights, more reps just mean you build more muscle, which takes up less space than fat and burns more calories at rest.  This is a win win situation, people.  I was (and am) living proof of why those standard BMI calculations based on height and weight are utter crap.  I consistently weighed 10-15 pounds above what I “should”, but my body fat was solidly around the 22% range (which is very lean for a woman).

Of course that percentage has gone up over the years as I fell out of the habit.  And while I’ve been GREAT over the last two years about getting back into cardio, there’s only so much you can do with limited time to exercise, so the smart thing is to raise my resting metabolic rate by increasing my muscle mass.  I started out using Tom Venuto’s The Body Fat Solution.  Which is a good program, but it seems to be geared more toward beginners.  So I moved on to his Burn The Fat, Feed The Muscle program which has more latitude and challenge.

One of the things that I was hesitant about with this program is eating more.  It seems counter to everything we are told about weight loss.  You have to create a calorie DEFICIT to lose fat!  For the last 2 years, I’ve been consistently on a 1250-1400 calorie diet.  My general policy was to use that as a base (as it’s close to the BMR of my goal weight) and then “earn” more calories through exercise.  And it’s worked to a point, but I really plateaued this summer.  Based on Venuto’s program, I should be eating closer to 1500-1750 as my base (and doing a sort of cycle of 3 low days plus 1 maintenance day at around 1900 calories).  My gut reaction to this was “are you kidding?” because every time in my life I’ve tried upping my calorie intake, it had the predictable result of my gaining weight.  But I thought, what the hell, I’ll try it for 2 weeks and see how it goes.  His theory is that it’s better to create your calorie deficit primarily by exercise so that your body never goes into starvation mode.  Given that Americans as a culture are generally lazy, it’s unsurprising that the majority of people tend to try to lose weight by diet first or predominantly diet instead of exercise.  Because, let’s face it, exercise is WORK!  Venuto also advocates not just paying attention to your weight, but tracking your lean mass vs. fat mass.  Sometimes the actual scale doesn’t move but your ratio of fat to muscle DOES change.  So I’ve been doing that.

And it’s been working.

The scale hasn’t been moving a whole lot, but the body fat percentage is dropping and the muscle is increasing. My jeans are getting fractionally looser.

Why didn’t this work before when I tried upping my calorie intake?  I think it had a lot to do with what I was eating.  This go round, I’m trying to stick pretty close to Venuto’s nutritional recommendations, meaning that I’m not eating junk.  I don’t eat a lot of junk to begin with, and now I’m trying to get those extra calories in the form of protein, veggies, and healthy fats (yay Omega 3s and 6s!) because these are the necessary building blocks to gaining more muscle (which burns more calories–are we seeing a pattern here?).  I think, too, that before I would often bump up my calories and unintentionally slack off on the exercise so that I lost the level of burn I had going on.  This time I’ve been very very consistent with my exercise, diligent to make sure I meet my minimum level of activity for the week.  So, no idea how this will go through the holiday season, but I feel like I’m in position to be a little slimmer by January than I am today.

I can definitely tell a difference in my mental state now that I’m focusing more on actual pounds of lean muscle vs. pounds of fat instead of the total number on the scale.  It’s enabled me to see the progress I’d otherwise be missing.  And it seems like it’s put me back on a healthier track than getting scale obsessed, which is more in keeping with the point of Operation Goddess In Training–becoming the best and healthiest me I can be–not the thinnest me.