Chicken caccitore is one of those dishes that most people have heard of and don’t actually know what it is.  I’ve never actually had it, but had it pop into my head when I was doing my menu planning for the week, so I started prowling around on Food Blog Search to see what other food bloggers had done.   Chicken caccitore is an Italian dish that basically translates into Hunter’s Chicken.  Why it’s called that, I have no idea since you wouldn’t hunt a chicken.  I postulate that the original dish was made probably with something like rabbit or pheasant or something you’d actually hunt, then was adapted for use with more readily available chicken when people stopped acquiring their meats by hunting.  In any event, it’s a very simple braised chicken with tomatoes and herbs.  Some versions have capers, but I am NOT a fan, so I opted to try one that didn’t utilize them.  This version by The Shiksa In The Kitchen was super easy and already had notations for conversion if you’re gluten free.  The only real change I made was to use boneless, skinless chicken breasts, as that’s what I had on hand.  Delicious. 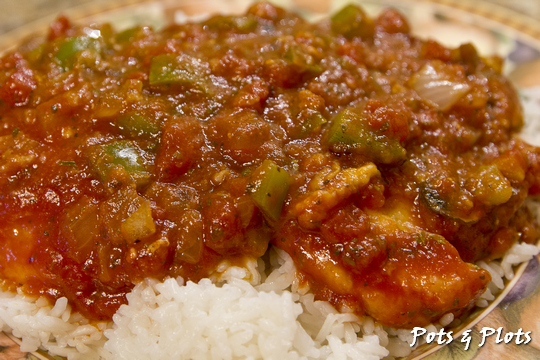