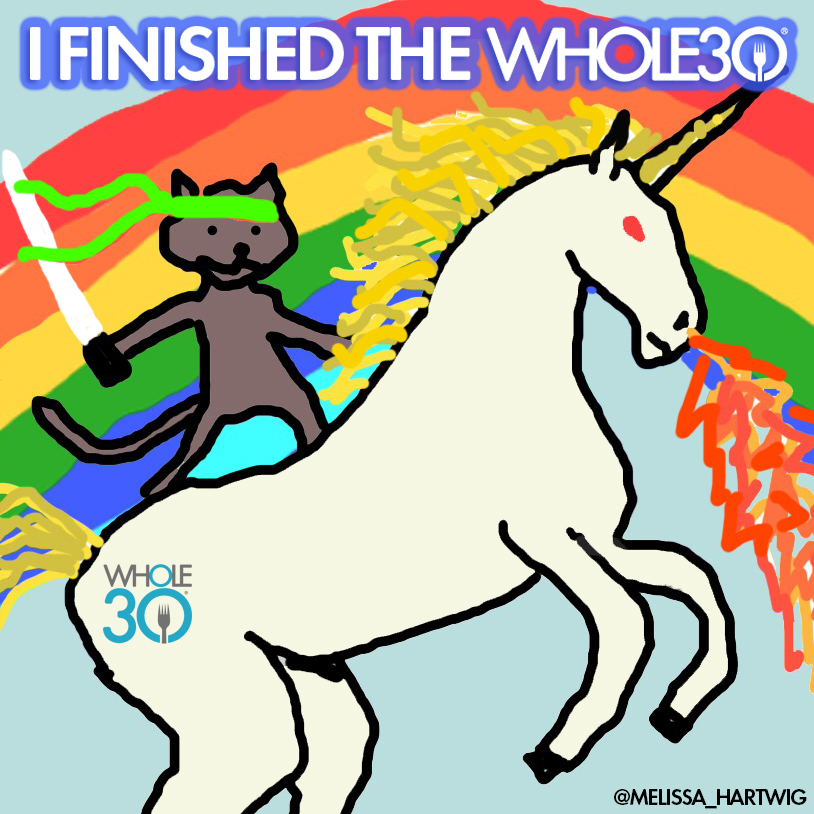 Well, I did it.  I survived Whole30.  It was easier than I expected…although part of that was because 2 and a half weeks in, after all the caffeine headaches had passed, I decided that one cup of proper tea, exactly as I normally drink it, wasn’t going to derail my progress (unlike all the other stuff I was eating to try to unsuccessfully satisfy the craving for it).  Of course, a program like this is much easier for a household where we already cut out dairy and gluten because of food allergies.  At the end of the 30 days, I’m down 6 pounds and my middle and backside are slimmer.  My blood sugar is stable.  Cravings in general have all but disappeared and the ones I do have (mostly) are of the “oh that sounds tasty” rather than the “OMG GOTTA HAVE IT GET IN MAH BELLEH” variety.  And my hormonal acne (a huge issue since I left birth control behind four or five years ago) has dramatically improved.  I’m back to my low from last year and definitely reset from the holidays.  All in all, I’m calling it a success.  Hubs and I will be shifting in to broader scale Paleo (which is more inclusive) from here, with the occasional splurge.  We’ve agreed on one bag of Fritos Scoops a month.  It’s a personal weakness for both of us.  Terrible for you, but chili and taco soup just isn’t right without them.  Tonight, though–TACOS.  WHEE!

I’ve been seriously head down in the book.  I finished Act 3 last night, so now I’m in the final push to get through Act 4.  Depending on how things go the rest of the week, that might happen by end of the weekend (and then I have a scene and a half to go back and write).  But THE END IS COMING.  I’m at the top of that roller coaster about to hurtle toward the end.  I love this part.  Hoping to get it to The Pink Hammer by next week, then dive into revisions on the novella I wrote over Christmas, while I plot out the second book in my Sooper Seekrit Project trilogy.