Let it be stated that I do not make claims that this is in any way an authentic Key Lime pie (apart from the fact that it contains Key Lime juice).  I have been seriously craving pie for a few weeks now (I blame it on True Blood–someone is eating pie every other episode), and since I was fortunate enough to lay my hands on a bag of Key Limes (which make fabulous guac by the way), I knew it had to be Key Lime pie.

But of course I’m doing that whole 1300 calorie diet thing and real, true, honest to God Key Lime pie would eat up about half my daily alotment of calories.  That will never do.  So I began to do a bit of research on what goes in a Key Lime pie.  Graham cracker crust, obviously.  Sweetened condensed milk.  Key lime juice (duh).  Egg yolks.  Whipped cream.  So I started poking around trying to see what was out there in the realm of lightened up versions.  I came across a recipe somewhere that called for lime yogurt and lime Jello.  Dude.  Green Jello?  That totally makes me think of being in the hospital getting my tonsils out when I was 8.  Green Jello is not for normal human consumption.  And it SURE as hell doesn’t belong in Key Lime Pie.  So I quickly gave up the idea of finding someone ELSE’S lightened version and decided to make my own.

Now, I am a huge fan of lemon icebox pie.  It is my favorite pie.  Very straight forward.  Graham cracker crust, sweetened condensed milk, lemon juice, Cool Whip.  Where are the eggs you ask?  Well see, my mom made this a lot when I was younger and on one particular occasion, she forgot the eggs entirely.  We never noticed, so she never put them back in.  So that was the first change I made.  No egg yolks in this Key Lime pie.  Saves on calories and then you don’t have any worries about the raw egg thing.  Change number two was a no brainer–fat free sweetened condensed milk.  I’ve been using it my lemon icebox pie for years.  Change number three–skip the whipped cream and save yourself the mess of making it yourself.  Go with some fat free Cool Whip.  And unless you are a die hard maker of your own crust (I’m not a true baker, remember?), Keebler makes a nice reduced fat graham cracker crust that’s right there on the baking aisle.  It means you can throw this pie together in 5 minutes.  Okay 15 if you don’t have a lime juicer. 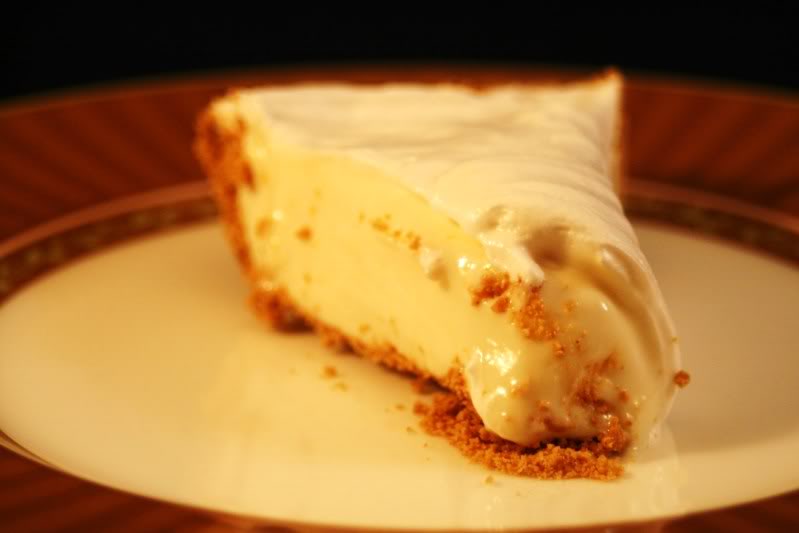