We all know I love fairy tales.  I’ve got a whole shelf in my personal library devoted to books of them from around the world.  So when I heard about ABC’s Once Upon A Time, I got really excited.  The basic premise is of a little New England town that’s home to all these fairy tale characters who are under a curse that prevents them from remembering who they really are.  Right up my alley.  Because I almost never watch anything live these days, hubby and I just got around to it on DVR last night.  If you don’t want spoilers, STOP READING NOW. 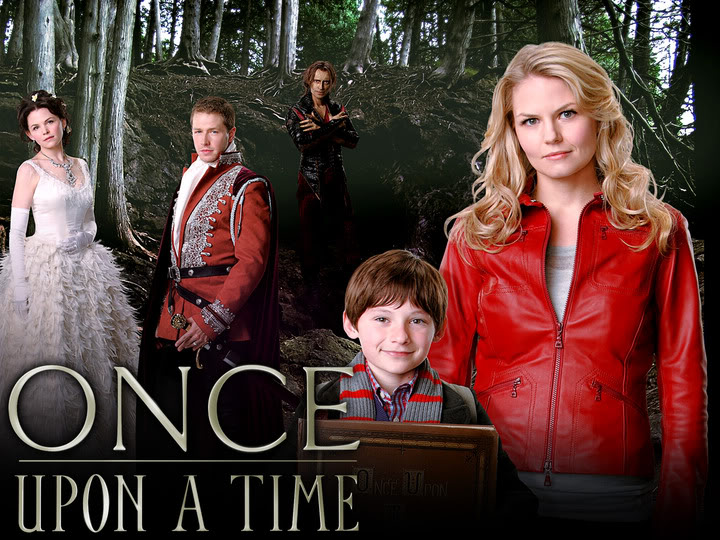 This opening episode is told in a sort of frame story style.  One story track follows the residents of the fairy tale world.  The other follows bail bondsman–excuse me bail bondsperson–Emma Swan who is taking down a deadbeat cheating husband.  The whole episode flips back and forth between these two storylines so we can get both the backstory and the current story.

The show starts with Prince Charming’s epic ride to Snow White’s side (she’s already in the glass coffin).  Apart from the fact that I’ve never thought there was anything remotely heroic or epic about the hero in Snow White, I went with it for the sake of story set up because Charming is played by Josh Dallas and he’s cute and he looks like he could actually handle a sword.  There’s the expected kiss, she wakes up, and then we flash forward to the wedding where Snow White, played by Ginnifer Goodwin, has managed to acquire a supremely unflattering up do for the occasion that is more redolent of Bellatrix Lestrange than fairy tale princess.  In any event, the Evil Queen (of “Mirror, mirror” fame) crashes the wedding and vows revenge.   Duh duh DUM.

Flash over to Emma–played by Jennifer Morrison of House and How I Met Your Mother–who’s getting home from her lousy night and makes a birthday wish on her single tiny little cupcake (and what a way to garner sympathy from the females in the audience–ONE cupcake?  May we all avoid such a sad fate.) that she doesn’t have to spend her birthday alone.  Cue the knock on the door.  Enter a smart, bookish-looking lad of about 10.  “Hi, I’m Henry.  I’m your son.”  Emma has an understandable “I’m sorry, what?” reaction before it comes out that she did, indeed, give up a child for adoption 10 years ago.

Back to Fairy Tale world, Snow is preggo and really anxious about the Queen’s threat (and still sporting the Bellatrix ‘do).  To allay her fears, Charming takes her down into the dungeons to speak to the one person in the land who can see the future–Rumpelstiltskin.  Rumpel is played by Robert Carlysle, the guy who played Durza in Eragon.  Hubby also tells me he was in 28 Weeks Later, but I ceased my scary zombie flick watching before it came out.  In any event, creeptastic though he may be, he tells them that the kingdom has hope as long as they can protect their unborn daughter.  She will return 28 years later and defeat the Evil Queen.  Snow gives him the name of her unborn daughter–Emma.  Ah ha!

Flash back to the object of said prophecy who has some banter back and forth with Henry before she insists on driving him home to Storybrooke, Maine.  He’s carrying with him a book of fairy tales and tells her the fantastic story that fairy tale characters are real, they’re inhabiting his town, don’t know who they are, and she is supposed to break the curse.  Emma, naturally, thinks he’s making all this up.  Then they get to Storybrooke, where the town clock has been stuck at 8:15 forever, and back to Henry’s house.  His adoptive mother turns out to be the mayor–who is in actuality the Evil Queen.  There’s a lot of awkward and hostility when she finds out that Emma is Henry’s birth mother.  She ultimately thanks Em for bringing him home and Emma leaves.  On her way out of town, she swerves to avoid a wolf in the road and crashes her car.

Back to Fairy Tale world and the citizens have banded together to protect the unborn Emma, carving some kind of wardrobe out of a magic tree that is supposed to open a portal to somewhere the child will be safe.  It only holds one.  The plan is obviously to send Snow through to our world.  But this plan goes awry when Snow goes into labor.  Cue boiling fog and bad guys as the curse begins to race in from the edge of the kingdom.  Emma is born and Snow insists they send her through, so Charming takes his newborn daughter and rushes to get her to the wardrobe (C.S. Lewis anyone?).  Turns out he can handle the infant AND a sword because he has to fight his way past castle invaders to get there.  He’s wounded but prevails.  Reaching the nursery, he locks her in the wardrobe and turns to face the new invaders.  He’s felled by a gut stab.  When they open the wardrobe, the baby is gone.

Back in Storybrooke, Emma wakes up in a jail cell (I personally found this odd, as I’d have thought they’d take a crash victim to the hospital) where they think she had been driving drunk.  The mayor shows up and says Henry’s missing again.  Emma volunteers to use her mad skills at finding people to help locate him.  He’s a clever kid, cleared his web cache, but Emma digs deeper and finds that he used WhosYourMomma.com to find her.  The credit card charges lead them to Henry’s teacher at school.

Back to Fairy Tale world, Snow stumbles to the nursery to find an unconscious (or dead, we don’t actually know) Charming.  She tried to wake him with a kiss.  Epic fail.  Then the Evil Queen shows up and she’s all “Don’t worry. In a few minutes you won’t even remember he exists, let alone that you loved him.”  And the boiling black fog rolls in and the palace roof is ripped off as the curse takes hold.

Back to Storybrooke we get to the school for a confrontation with Henry’s teacher who turns out to be Snow White (with a new name I am sorry to say I don’t remember) who’s lose the Bellatrix ‘do in favor of a very Audrey Hepburn pixie cut.  She knew nothing of Henry taking her credit card, but she was the one who gave Henry the book of fairy tales, something which sets the mayor off on a tantrum.  She storms out.  Emma stays behind to help clean up the mess and the pair of them set off to find Henry who’s at “his castle” (a playground castle).  Emma talks to him again, and he begs her to stay, just for a week and not to make him go back home because his life sucks.  She tries to talk sense into him, explaining how he doesn’t know how good he’s got it because she was left on the side of a highway and grew up in the foster system.  He insists her parents loved her and that’s just where she came through and starts spouting off about how she’s supposed to be their savior.  She tells him she’s no savior and takes him home yet again.

We flash over to Snow White who’s apparently volunteering at the hospital where there’s a pretty big ward of coma patients.  She’s passing out little vases of flowers on their bedside table and we see Charming hooked up to monitors.  Strangely, none of these people (including those still walking around conscious) seem to have aged a day since the curse was cast.

Emma returns Henry home and tells the mayor she’s got a great kid.  The mayor gets incredibly hostile, making absolutely clear that this is not some kind of invitation for her to be a part of Henry’s life, that Emma may have given birth to him but she was the one who changed all the diapers, stayed awake through every fever, dealt with every tantrum, that he’s her son, and Emma needs to go back to Boston and stay away.  Emma asks if she loves him.  The mayor pauses and says coldly “Of course I love him.”  Then slams the door.  She goes upstairs and takes the book of fairy tales from Henry, then goes and stands in front of a mirror clutching it.  It’s questionable whether she remembers who she is or not.  Emma, meanwhile, doesn’t leave town and actually goes to take a room at a local B and B where Rumpelstiltskin–whoever he is in this reality–is there and overhears her name.  The town clock finally starts moving and Henry smiles, knowing that this is the beginning of the battle to end the curse.

If you missed it, you can watch the full Pilot episode here at ABC.com.

So…overall, I really enjoyed the opening and will definitely be continuing to watch.  I’m also eagerly awaiting the premier of NBC’s Grimm tonight at 8.

9 thoughts on “Thoughts on Once Upon A Time Pilot”