So it’s Friday.  I totally didn’t post yesterday.  Never even thought about it, as I was on the road for work and didn’t get home until late.  But I totally had some successes anyway in that I got my 500 word minimum in before I left and, bigger still, from an Operation GIT standpoint, I stayed within my calorie budget despite the fact that I was on the road all day, which usually means I have instant cravings for gas station snacks and fast food.  Doritos!  Super Sonic Cheeseburger!  Fries!  Frosty!  Sour Patch Kids! (Seriously, I have been in such trouble since they became widely available).  I left armed with menu choices from all the major fast food places that would actually fit in my budget and I stuck to it (and still had enough calories left for the small box of Sour Patch Kids on the drive home).  That makes for a 4 day streak.  And by the end of the day, I wasn’t ready to gnaw my arm off with hunger, so that definitely feels like I’m making progress in getting back on track and curbing my appetite and portion sizes.  Thank God.  My jeans have reached the straining point where they just aren’t comfortable, so this summer trend must be reversed. 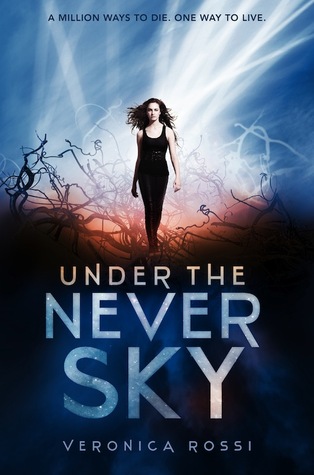 I did a lot of waiting around yesterday when I got where I was going.  Never my favorite thing, but the upside is I got to start reading Veronica Rossi’s Under The Never Sky, which has been hanging out on my TBR pile for quite some time.  I’ve been on adult kick for the last three or four months, so this is the first YA I’ve read since Sarah Rees Brennan’s Unspoken.  I’m not done yet, but I’m really enjoying this book.  It’s a YA dystopian (not usually my bag) that’s based around this premise that after some cataclysmic event (I don’t really understand what yet but it’s had profound effects on the environment), some of the population retreated into these biosphere kinda things, leaving the remainder on the outside.  A bunch of generations pass and the peoples evolve differently.  And then there’s this impossible situation where one of the pod people is Outside (where she’s been raised to believe she’s gonna DIIIIIIE from all kinds of awful stuff–and what do you know, she doesn’t) and has to team up with one of the so-called savages to find her mother, while she helps him find his nephew.  It’s this really fascinating juxtaposition of a very virtual, technology heavy society inside the pods (where they have developed rich virtual worlds to combat utter boredom and lunacy of their actual real world inside the pods) vs. a more natural, seemingly less evolved society that’s much more centered around survival than modern economics.  There are a number of points in the story where Rossi could have done the obvious thing but chose to go in another direction, and I really dig that.  I like being surprised as a writer, and it doesn’t happen often.  So, yeah, really digging where this is going.

3 thoughts on “Fiction Friday and Successes”