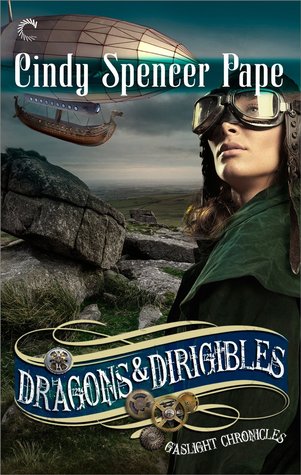 So I have no idea if this will become a thing, but I feel like talking BOOKS today.  As we move into the weekend, I am currently reading Cindy Spencer Pape’s Dragons and Dirigibles.  This is the seventh in her Gaslight Chronicles series, which I adore.  I started it a couple weeks ago, then got derailed by City of Heavenly Fire.  I really love this series, both because I love most things steampunk, and because they’re lighter than a lot of steampunk–in the sense that you don’t drown in worldbuilding and generally they’re told with a lovely humorous tone.  The stories are fairly short–from novella to short novel length, which means they fit well into my busy schedule.  I can generally plow through them very quickly.  The narrator for those made into audio (this one hasn’t made it yet) is fabulous.  Now if ONLY the next one were out soon!

When airship engineer Melody McKay’s dirigible explodes and plunges her into the yard of a gothic manor, she suspects foul play. With her ankle injured–an indignity far too feminine for her taste–she resolves to crack the mystery while in the care of Victor Arrington, the stuffy-yet-disarming Earl of Blackwell.

Ex-Royal Navy Captain Victor runs a tight house and is on a mission to protect his niece and foil a ring of smugglers using fire-breathing metal dragons. He has no time for romantic attachments. Particularly not with women who fall from the sky wearing trousers and pilot’s goggles.

As he and Melody navigate a treachery so deep it threatens the lives of everyone in Black Heath, the earl becomes unexpectedly attached to his fiery houseguest, and Melody discovers a softness in her heart for him. But when the smugglers strike, there’s more at risk than just their future together.

I am also making my way through the third book in the Caster Chronicles, Beautiful Chaos, in audio.  I’ve always really enjoyed the narrator for this series (this is a theme with me and audiobooks), and it’s been a couple years since I read the second one, so it’s nice to revisit Gatlin and Ravenwood.

What are you reading this weekend?

One thought on “Friday Fiction Round Up”