I love Tawna Fenske.  Seriously, the woman is always saying something to make me laugh, which is a trait I adore in…well anybody.  That she manages to do it in fiction, while keeping up a healthy dose of sexy and sentimental is just icing on the cake.  I just finished reading her latest, Fiancee For Hire, which is the second in the Front And Center series (I did not know this and will be rectifying having missed the first one ASAP). 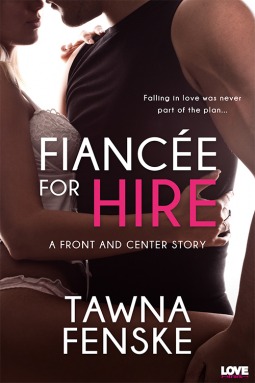 Former Marine MacArthur Patton has made a small fortune on top-secret government contracts and black-ops missions, but his new assignment involves something more dangerous—marriage.

To keep weapons out of the hands of terrorists, Mac has to secure a fiancée. A sweet, demure, compliant fiancée to serve as his arm candy for a few weeks while he completes the covert arms deal in Mexico. His sister claims to know just the woman, and sends her best friend to play the role.

“Sweet” and “demure” aren’t in Kelli Landers’s repertoire. A badass veterinarian who neuters big dogs and bigger men on a regular basis, she can’twait to bring Mr. Tall-Dark-and-Detached to his knees. Her longtime crush on the commitment-phobe makes her plan to seduce him even sweeter.

Love wasn’t part of the plan, but the deeper Mac and Kelli fall into their ruse, the more danger they attract, until more than just their hearts are on the line…

This book was delightful and hilarious and has earned two thumbs and all my toes (because that’s what I’ve got left to point) up!  Full Squeecanon Salute!   I’m still in the middle of Laini Taylor’s Dreams of Gods and Monsters and she’s not done breaking my heart–this was the perfect antidote.  I’m a sucker for the fake engagement/marriage trope, and this might just be my favorite one yet (which is saying something).  As a copy was gifted to me to read, I am turning around and returning the favor!  Just leave a comment telling me YOUR favorite fake engagement/marriage trope romance novel, and sometime at the end of the week I will randomly pick a winner to receive an ebook copy from Amazon, Barnes and Noble, or Kobo (I assume Kobo allows gifting).

One thought on “Book Review: Tawna Fenske’s Fiancee For Hire (And A Giveaway!)”