So Monday went well.  I knocked out a fair chunk of a scene that’s been giving me trouble.  Did some playing in my sandbox for the new website I’m designing (Lord knows when that will be rolled out).  Picked out a new theme to go with that.  And the rest of the week feels like a wash so far.  I HAVE gotten a crapton of plotting done for the next novel though.

I had planned to finish said troublesome scene yesterday, but I totally cheated and watched the latest episode of Hart of Dixie during lunch (OMG, take it slow? REALLY WADE?), and then my neighbor’s five year old twins popped over for a visit during my writing block, after I’d already gotten home late.  So I wound up finishing the book I was reading instead, then had taekwondo and…yeah.

I’m also in the development stages for a couple of new classes for writers.  One is an expansion of my Prepare to Launch class about self publishing, which is based on a presentation I did for WANACon last year.  The other is more to do with busting excuses about not having time to write and improving productivity.  I’m still kind of refining that concept.  That said, you can help me with that.

Tell me what your excuses are for not writing.

Yes, I turned comments back on.  Turns out I missed them.  Since I learned I can block trackbacks and pings, that eliminates a crapton of the approval emails I was getting in the first place.  🙂

Also, what areas do you feel you need more help with in terms of productivity as a writer?

This week’s new recipe over at Pots and Plots is Gluten Free Dairy Free Bacon Corn Chowder.  For those of you wondering, yes I do my grilled cheeses in a waffle iron.  I used Go Veggie’s Vegan (not the Lactose free–ACTUALLY dairy free) cheddar slices for the grilled cheese. 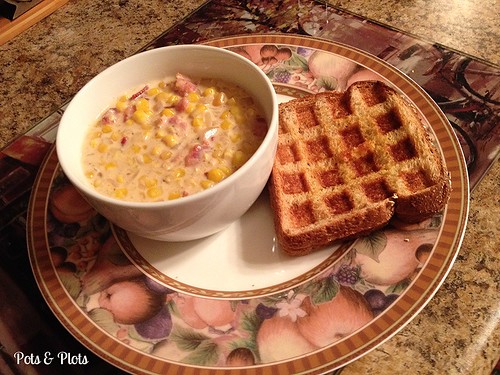