Spaghetti sauce is one of those things that makes me think of large Italian grandmas with secret recipes that take hours to properly simmer and meld flavors.  I have no idea why I have this image, as growing up, spaghetti sauce in our family came out of a can or a jar with a bit of browned hamburger meat added.

Sometimes I really wonder where I came from.

My own recipe for “real” spaghetti sauce is a house fave that I’ll share another time.  It’s an ingredient intensive concoction that is best simmered for a few hours in a crock pot.  Sometimes you just don’t have time for the real deal.  And really, who among us does not have a lone can or jar of Hunts or Ragu collecting dust in the pantry?

A lot of us foodies tend to turn our noses up at such things.  But there’s nothing inherently wrong about these products–I mean, they’re nothing but tomato sauce with some spices (and preservatives, but we won’t get into that argument today).  They just need some help.  Some TLC.  And some of those ingredients we throw in our “real” spaghetti sauce. 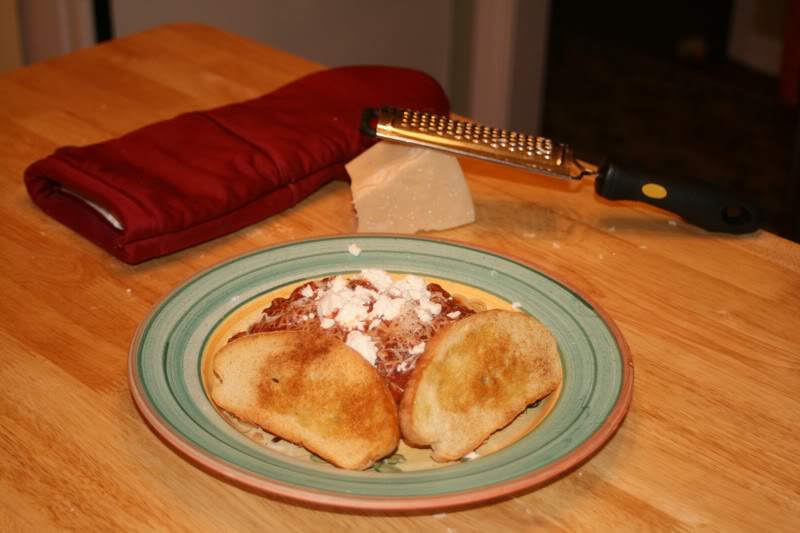 Brown the meat, drain and rinse.

Dump everything in a pot and simmer for half an hour.  Seriously, that’s it.  You just want to stir to make sure the tomato paste and liquids are combined with the canned/jarred sauce, then simmer on low heat until the liquid is slightly reduced.  Nobody will believe it came out of a can.

Serve over pasta of your choice with parmesean, romano, or goat cheese.  Or all three. 😀  All three is good.

You could also add diced bell pepper and mushrooms or more diced tomatoes for a chunkier sauce.