I hate traditional potato salad.  All that globby mayo.  Ugh.  Horribly fatty and bad for you.  For some reason, for most family functions, I am often assigned the potato salad.  I have no idea why.  I always make some non-traditional version that no one but my mother in law will eat (because she is awesome like that).  My last attempt on that front was a sour cream and dill potato salad.  In any event, a couple of months ago, I stumbled across this recipe for grilled potato salad and everyone fell in love.  Even my husband, who flat hates potato salad period, actually likes this version.  So here we definitely have the official family potato salad.  I made a few small changes to the original recipe to lighten things up, as well as cutting the recipe in half (I don’t usually cook for an army) and the end results are delicious.  Please excuse my yellow bowl.  It looks a little funky. 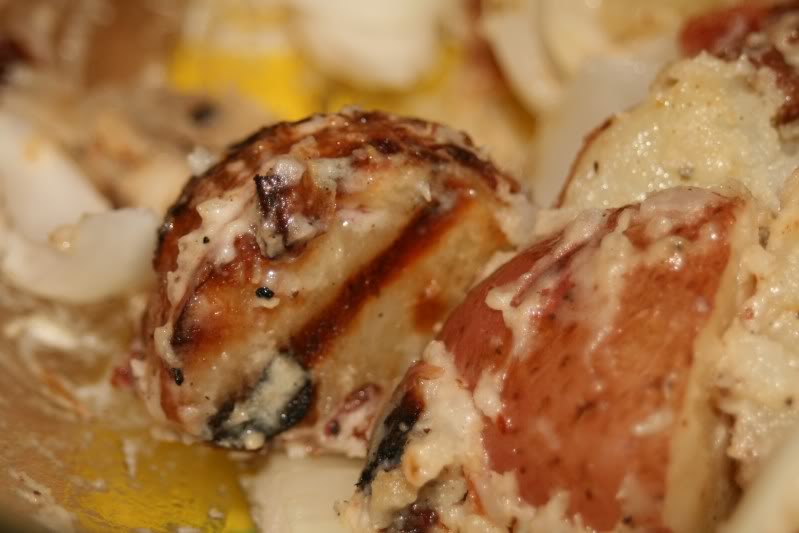 Coarse salt, such as kosher salt

1 medium vidalia onion quartered for grilling (meaning, leave the root ends on there to hold the onion quarters together)

1. Scrub the potatoes, put them in a large pot, and add enough water to cover by about 2 inches.  Salt the water generously. Cover the pot and set it over high heat. Bring the water to a boil, then reduce the heat to a brisk simmer and cook until the potatoes can just be pierced by a fork. The time will vary with the size of your potatoes, but they may take up to 25 minutes.

3. The original recipe suggests cooking these over high heat.  I did this the first time I made this salad and wound up with blackened potatoes.  I find it is better to cook over more moderate heat–around 350 degrees on a gas grill.  You charcoal people are on your own.

4. While the grill is heating, warm a skillet over medium-high heat. Add the bacon and cook, turning as needed, until crisp, 12 to 15 minutes. Remove the bacon from the skillet and drain on paper towels. When it’s cool, chop roughly and set aside.

5. Layer your quartered onion on the grill (I find the grilled onion is a lovely addition to this recipe) along with all your potatoes.  Original recipe says to turn frequently, but I find just keeping an eye on them and flipping once or twice works just fine.  You’ll get all that wonderful smokey flavor and grill marks but won’t burn them.  This should take about 8 to 12 minutes.

6.  When you pull the onions off the grill, you’ll need to carefully take a knife and cut off the portion still holding them together.  They should have fanned out nicely from being grilled.  Put them in a bowl, and add the bacon, potatoes, and parsley.  Drizzle the dressing over the potatoes, toss gently, and serve immediately.