I don’t know about you, but when I hear the word “chalupa”, I think Taco Bell.  I’ve never actually had a chalupa from Taco Bell, but I have vague memories of commercials that involved some kind of flat bread or shell or something.  Anyway, a friend of mine suggested a recipe from The Fix It And Forget It Cookbook. But me being me, I had to adapt to what I had on hand.  I’m not a pinto bean fan, so I swapped those out for black beans.  I had diced peppers from last year’s garden in the freezer.  And rather than just plain water, I thought it would be nice to throw in a beer and some chicken stock.  The original recipe is for a 3 pound roast.  As I only had one half that size, I wanted to half the recipe.  I actually forgot to half the spices and the peppers, but the extra flavor was actually a bonus.  The end result was spicy and delicious and very reasonable calorically with 4 servings at 396.5 calories and 7.3 grams of fat per serving.  Actually, if you count the beer and chicken stock it’s 423 calories, but I drained the juice off, so it seems like it shouldn’t count.   I served this up on whole wheat tortillas with cheddar cheese, sour cream, and salsa.  It’s a really great dish to make ahead of time and reheat when you’re ready. 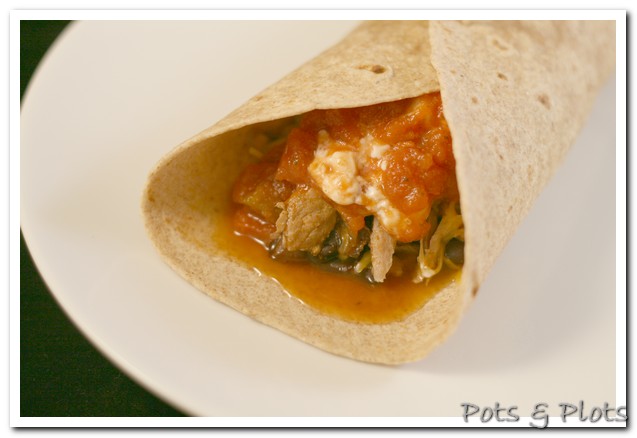 This recipe on Tasty Planner. 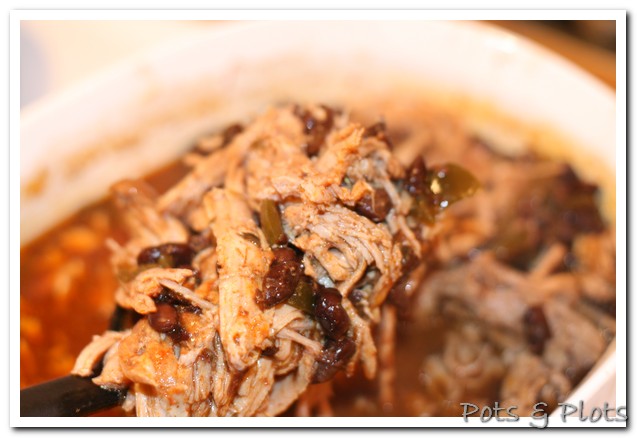