I just got back from the vet’s office.  Oh, don’t worry, the girls are fine.  It was just time for Daisy’s annual checkup and rabies shot.  And it’s just easier to take both of them than to leave one behind.  It was quite funny.  Callie pranced right in and preened like “These are my peeps!”  They totally love her at the vet’s office and she knows it.  Daisy, on the other hand, totally freaked out and was shaking like a leaf, poor thing.  But everybody’s all updated on shots and heartworm and such, and there shall be chicken and rice all around, which will make them both quite happy. 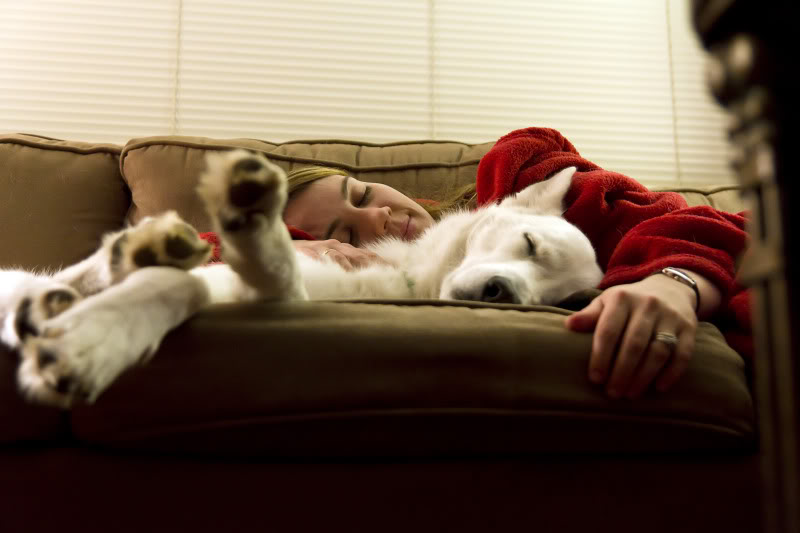 Because nothing is better than puppy cuddles. Isn’t my baby cute?

Over at Hunting High and Low, Pot has just made the announcement she’s been dreading–that the sequel to Hush Money will not be out in January.  And you know what?  That’s totally okay.  Because sometimes life (in her case lots of snow days that kept her young child home from school and ate up her writing time, as well as an assortment of other things) just interrupts.

It’s interrupting me too.  Like that’s a shock.  All of 2010 has been one long interruption.  I had expected to spend my holiday writing this short story for the anthology I was invited to contribute to.  But the fact of the matter is that there are a LOT of family obligations I have to attend to and there are 8 lectures left to be written.  If my semester is to get off to a sane beginning, I must get those finished.  Even though I’d rather be playing.  And it’s not going to leave me writing time.  Or not much anyway.  I could write it in January, in theory, but that would mean delaying Red even more, and frankly, I just don’t want to do that.  I’ve been waiting since AUGUST to start this book (or continue with it, rather, since I have the first chapter finished), and I don’t WANT to wait anymore.

I still want to write the short story.  It’s a great introduction to Isla and sets up a lot of stuff for the broader series metaplot.  But I think it will come a bit later, as I have more time.  I’ll be giving it away for free to people who sign up for my newsletter, I think.  And it will be included in the compilation print edition (tentatively titled Genesis)that I have planned for 2011, which will include Forsaken By Shadow, Devil’s Eye, and this story.

In the meantime, I really need to buckle down and write these lectures.