On this whole road of fumbling toward publication and platform building, we try this, we try that, and sometimes we get good results.  Sometimes we get crickets.  It’s often difficult to know whether what we’re doing is making any difference at all.  We can make smart decisions, like buying my pal Kristen Lamb’s book We Are Not Alone: The Writer’s Guide To Social Media, which is a fantastic road map to this platform building thing (save the chapter on MySpace, which went crazy a week after the book released–MySpace went crazy, I mean, not the chapter).

You see your daily blog visits go up.  Your follower count on Twitter goes up.  You get more friends on Facebook.  But how do you know it’s really doing any GOOD?

Well one interesting site I’ve stumbled across actually sort of measures this: Klout.

The Klout Score is the measurement of your overall online influence. The scores range from 1 to 100 with higher scores representing a wider and stronger sphere of influence. Klout uses over 35 variables on Facebook and Twitter to measure True Reach, Amplification Probability, and Network Score.

True Reach is the size of your engaged audience and is based on those of your followers and friends who actively listen and react to your messages. Amplification Score is the likelihood that your messages will generate actions (retweets, @messages, likes and comments) and is on a scale of 1 to 100. Network score indicates how influential your engaged audience is and is also on a scale from 1 to 100. The Klout score is highly correlated to clicks, comments and retweets.

That all sounds like good metrics for progress to me.  So let’s take me, for example.  I’ve been platform building for three years.  I started with the blog.  A couple years ago, I added Twitter, and over the last couple of years I’ve stumbled through the WTF is this thing? into OMG I love Twitter.  I’ve built my follower count one person at a time doing one really radical thing: talking to people.  I do have an auto DM for anyone who follows me that is an instant conversation starter–NOT one of those Hey, check me out at XYZ things.  I autofollow anybody who follows me (with a monthly troll to get rid of bots), and over the last two years, my followers have jumped to over 4,200.  We all know I hate Facebook, so I’m not even bringing that into the equation for my success.  Let’s still with Twitter.

How effective are my 4,200 followers?  Are they mostly bots?  Advertisers?  Not real people to engage with?  Because that’s what you’ll get through all those programs that promise to build your Twitter platform.

Let’s take a look at my Klout Influence Report.

You may not be a celebrity, but within your area of expertise your opinion is second to none. Your content is likely focused around a specific topic or industry with a focused, highly-engaged audience.

What exactly am I a specialist in?  Well the topics they suggest I’m influential about are books, writing, authors, gluten-free, blogging, and southern.  Um, yeah.  If you hang around me on any given day on Twitter, that’s exactly what I’m talking about.

How about my Network Influence? 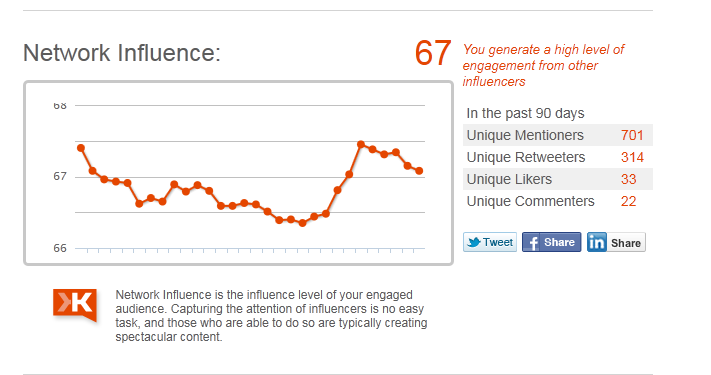 How about my Amplification Probability? 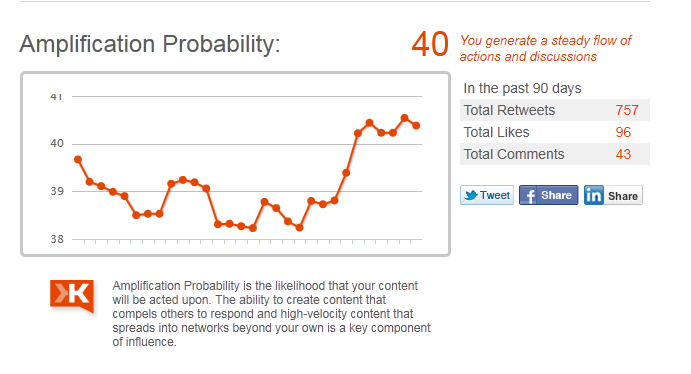 And here’s the one we all really wanna know…True Reach.  Of those 4,200 followers, how many of them am I really reaching?

Yep, that’s right.  A whopping 2,000 people.   Just under half the people following me are actually paying attention.  What a concept.

How does this translate into book sales?  Who knows.  That’s not what this site measures.  But this is proof that I’m doing a good job getting my name out there and engaging people.  Which is, in the long run, going to get me a lot more in the way of sales than traditional advertising.  Why?  Because instead of annoying people with ME ME ME ME, BUY MY STUFF! all the time, I’m building relationships.  And when you build relationships, when you do make occasional requests to spread the word (and even when you don’t), those FRIENDS are happy to do so.

Now, I don’t point you in this direction to give you yet another stat to obsess over.  I don’t see the point in checking in more than once a month (as things generally don’t change that fast).  But it’s worth logging in to see where you stand and figure out what you might need to change.