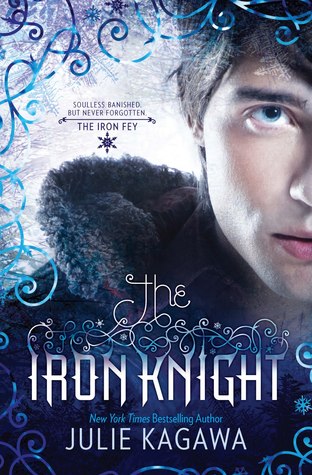 I was a fan of the Iron Fey series long before I became agent-mates with Julie Kagawa.  I had, in fact, plowed through The Iron King, The Iron Daughter, and The Iron Queen.  I absolutely fell in love with Meghan Chase as a heroine.  She is brave, determined, and an all around excellent example for female readers in a world where there are too many heroines who have zero self confidence.  Not like Meghan is perfect and thinks she’s The Sh*t.  She’s not and she doesn’t.  She’s very…human and relatable as a character, despite her half fey heritage. And, quite simply, when I finished The Iron Queen, I was DESPERATE to know HOW she was going to fix this impossible relationship she’d set up between Meghan and Ash, the Winter Prince.  Like, to the point that I dropped wink, wink, nudge, nudge, hints to Laurie and Julie every time I talked to them about, hey, can I get an ARC of The Iron Knight?

When I finally got one approved through NetGalley, I swear you probably heard the squee wherever you are.

So here, we go, the nitty gritty:

Ash, former prince of the Winter Court, gave up everything. His title, his home, even his vow of loyalty. All for a girl… and all for nothing.

Unless he can earn a soul.

To cold, emotionless faery prince Ash, love was a weakness for mortals and fools. His own love had died a horrible death, killing any gentler feelings the Winter prince might have had. Or so he thought.

Then Meghan Chase—a half human, half fey slip of a girl— smashed through his barricades, binding him to her irrevocably with his oath to be her knight. And when all of Faery nearly fell to the Iron fey, she severed their bond to save his life. Meghan is now the Iron Queen, ruler of a realm where no Winter or Summer fey can survive.

With the (unwelcome) company of his archrival, Summer Court prankster Puck, and the infuriating cait sith Grimalkin, Ash begins a journey he is bound to see through to its end— a quest to find a way to honor his solemn vow to stand by Meghan’s side.

To survive in the Iron realm, Ash must have a soul and a mortal body. But the tests he must face to earn these things are impossible. At least, no one has ever passed to tell the tale.

And then Ash learns something that changes everything. A truth that turns reality upside down, challenges his darkest beliefs and shows him that, sometimes, it takes more than courage to make the ultimate sacrifice

This was very different from the previous Iron Fey books in that there’s very little of Meghan.  I mean, obviously.  She’s not on this quest.  She’s off ruling the Iron Realm.  That was a little weird for me and I definitely missed their interactions.  But there was Puck banter.  And insults from Grimalkin.  And the very interesting addition of The Big Bad Wolf (yeah, the one who tried to EAT HIM in a previous story).  And…someone else I can’t tell you about for major spoiler avoidance.  Let’s just say it’s a humdinger of a surprise.

I laughed.  I wept.  I came perilously close to flinging my Nook before I remembered, hey, it’s expensive equipment and because I trust Julie NOT to lead me astray and break the oh so important rules of romance.  Because she’s cool like that.  And it’s spoiling nothing to say that she totally delivers my desired happy ending (c’mon, it’s romance–you knew she would).  And it’s worth every emotionally-charged minute of the ride.  BUY IT (you can pre-order on Amazon and Barnes and Noble).  And then go tell Hollywood they need to JUMP ON THIS because this is SO MUCH FREAKING BETTER THAN TWILIGHT.  Who’s with me?

Now the important question: Julie, when does Puck get a girl?

7 thoughts on “Review: The Iron Knight by Julie Kagawa”