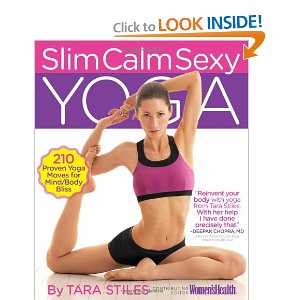 So I mentioned in my post yesterday that I needed to shake things up some on the work out front.  As it was raining this morning, it was a good time to give that a shot.  Last night I went through my copy of Calm Sexy Slim Yoga and programmed the fat burning routine into my workout timer on my phone (which has text to speech so it will tell me what to move to next–which is primarily what I wanted in my Wii yoga game–not because I didn’t know the poses).  It’s this fairly brutal routine that starts with 60 seconds in Plank, goes to Up Dog for 5 breaths (approximately a minute if you’re doing proper yogic breathing), Down Dog for 5 breaths, then this horrific sequence of Down Dog Split for 5 breaths to Knee to Forehead for 5 breaths–FIVE TIMES–then into Low Lunge for 5 breaths, High Lunge for 5 breaths, High Lunge With Twist for 5 breaths, and Reverse Triangle for 5 Breaths.  Then starting over again at Down Dog.

When I initially programmed it into my phone, the routine came out to 32 minutes.  Then it occurred to me that with all that Down Dog Split, Knee to Forehead business (which means you’re on your arms for…like 13 minutes?) was not going to happen.  So I went back and dialed back all the Down Dog stuff to 30 seconds per pose.  That took me to 22 minutes.  Well, as soon as I started this morning, I realized even THAT was going to be too much and I had to dial it back to 15 seconds–even THAT was a huge challenge.  13 minutes total routine.  How humiliating.

But here’s the thing.  I conclude that I am simply not proportioned right for Down Dog or any poses based on it.  a) I am incredibly short waisted, b) My arms are not quite long enough proportionally (not like I look weird or anything but from a perfectly proportioned body standpoint they’re short)  Because Down Dog is supposed to be a rest pose.  Most of your weight should be in your heels and legs.  Now I have issues with this anyway because of mega tight hamstrings but I have NEVER been able to make that happen because my center of gravity (i.e. my butt) is putting most of my weight on my arms.  Which makes Down Dog like…the second worst yoga pose in the world IMO (next to Crane).  So…I’m going to stick with the 13 minute routine for now and build up and adapt as necessary, supplementing with other things.

The Kinect in the living room has been mocking me.  I was all excited to have SPACE in this new house to actually use it properly, but I think I’ve used it all of…twice?  Once for Kung Fu High Impact and once for Tai Chi.  Here’s the thing.  I like the Kinect in concept, but I am a woman who DOES NOT believe in getting out of bed a single second earlier than I have to.  So the fact that it takes FOREVER to actually get INTO the stupid games makes me not want to use it for exercise. Because it takes a while to turn on, then I have to log my husband out, then log myself in, then wait for the game to go through a ridiculous number of pre-game credits.  THEN the stupid Kinect has to calibrate.  Then the actual navigation within the game takes too long.  I don’t know if this is all Kinect games or just Your Shape Fitness, but damn.  I really don’t give a crap about fancy graphics for exercise, which is why I consistently go to my Wii which boots up and is ready to use in less than 2 minutes.  I might give it a try for a lunchtime workout when I can use the boot up time to go fill up my water bottle, change clothes, whatever.

Either way, I want to find something fun to do that is NOT aerobics or dance (because both of those things require this thing called coordination and rhythm, which this chick does NOT have and makes me hate both).  I’m really not nuts about workout DVDs either.  So…yeah, not sure what I’ll end up doing.  Still plugging away.