Halestorm makes a really kick ass seed for a Pandora station.  Lizzie Hale has such a gloriously GRITTY sound to her voice.  The station is full of all my rock favorites like Breaking Benjamin, Evanescence, Seether, Hinder, Five Fingered Death Punch, Nickelback (the early years), and others.

Liana Brooks’ Even Villains Fall In Love.  I’ve had this one a while and only just got around to it over the weekend.  It was absolutely PERFECT.  A short, light read, that made me laugh when I really needed it.  There was a fantastic twist at the end that I hadn’t expected and totally fixed the one thing that had been niggling me for the whole story.  If you loved The Incredibles, this is the novella for you.  Here’s the blurb: 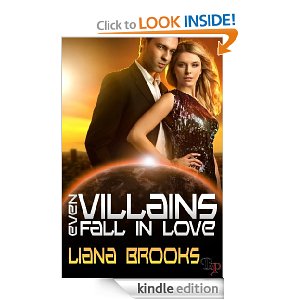 A super villain at the top of his game must choose between the world he wants and the woman he loves.

If you believe the rumors you know that Doctor Charm, the wickedly sexy super villain, retired in shame seven years ago after his last fight with the super hero Zephyr Girl. The fact that the charming Evan Smith—father of four and husband of the too-beautiful-to-be-real Tabitha—bears a resemblance to the defeated Doctor is pure coincidence. And, please, ignore the minions.

Everything is perfect in the Smith household, until Tabitha announces her return to work as a super hero. Evan was hoping to keep her distracted until after he rigged the 2012 presidential election, but—genius that he is—Evan has a backup plan. In his basement lab, Evan has a machine whose sole purpose is keeping Tabitha hungry for him.

But children and labs don’t mix. The machine is broken, and Tabitha storms out, claiming she no longer knows him. World domination takes a back seat to meeting his daughters’ demands to get Mommy back right now. This time his genius isn’t going to be enough—he’s going to need both his evil alter-ego, and the blooming super abilities of his children to save his wife. But even his most charming self might not be enough to save their marriage.

Vegetarian Shepherd’s Pie from The Shiksa In The Kitchen.  I’m not a vegetarian, but I really like veggies, so I’m always on the lookout for new dishes.  Lentils are one of those foods I keep trying but rarely like.  This dish goes on my short list of absolutely YES.  Mine wasn’t vegetarian strictly.  I cooked the lentils in beef stock to up the flavor quotient, and I added mushrooms because mushrooms are awesome.  I also added some shredded Dubliner cheese to the top because cheese is also awesome.  The end result was delicious, definitely one of those dishes that’s better the longer it hangs out in the fridge to let the flavors mingle.  Highly recommend.