So I finished Dragons and Dirigibles last week, which I enjoyed, though some of the plot seemed a bit rushed and more told than shown.  It had a MASSIVE twist at the end for another pair I’ve been shipping since book 4, so that left me flailing and Facebook stalking Cindy Spencer Pape to confirm that, yes, that pair are the subject of book 8, coming out in September.

I also kind of gave up on Beautiful Chaos.  I got about half through it in audio.  The narrator is great.  I’ve enjoyed him in the earlier books in the series.  I just…kind of don’t care anymore.  I wasn’t invested in the characters, and there are only so many ways you can essentially say that the shero broke the world.  Maybe it’s because I waited so long between finishing the first two and coming back, but I just…couldn’t make myself keep going. 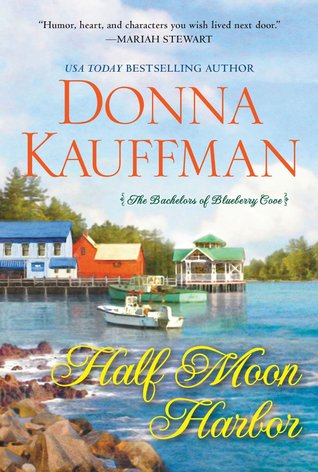 Moving on from there, in ebooks, I’m reading Donna Kauffman’s Half Moon Harbor, the latest in her Bachelors of Blueberry Cove series.   I really loved the first book in this series (Pelican Point) and am looking forward to spending some time in virtual Maine.

Bold, brash, Irish–Brodie Monaghan’s been breaking hearts ever since he arrived in Maine to rebuild the family business. Still, there’s one woman he just can’t wow. Grace Maddox claims she’s now part owner of Monaghan Shipbuilders, and she has her own dreams for the weathered dockside buildings. Tiny Blueberry Cove has a way of welcoming strangers with wide open arms, but is the sleepy coastal village ready for the fireworks these two spark?

And in audio, I decided to revisit an old favorite–Elizabeth Peters’ Crocodile on the Sandbank, the first in the Amelia Peabody series.  I am now officially older than “spinster” Amelia (who is 32 in this book).  It’s cracking me up.

2 thoughts on “Friday Fiction Round Up”