I haven’t had a lot of spare time for reading lately.  In honor of season 1, I’ve been rereading Outlander in audio.  It’s been probably eight years since I last reread it, and it turns out I’ve forgotten a lot.  It’s kind of interesting to reread now that I know craft and story structure so well.  But either way, I still adore Jamie Fraser. 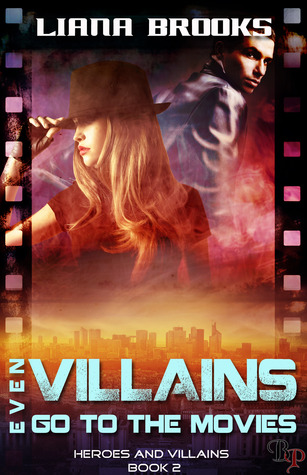 I did finish reading Liana Brooks’ Even Villains Go To The Movies, which is the second installment in her Heroes and Villains series.  This was a lot of fun, with a very appealing heroine and a sexy, Shakespeare quoting hero.  I love this series so much, and I can’t wait for book 3, which follows Delilah.

When your mother is America’s Superhero Sweetheart and your daddy’s the Number One Super Villain, you grow up feeling a little conflicted.

Angela Smith has superpowers—nothing that will ever make her comic-book famous—but her ability to psychically sense and manipulate the emotions of people around her has drawn unwanted government attention. Forced to choose between her quiet life as a teacher under constant surveillance or the life of a rogue, she chooses the latter. She plans to hide out in sunny Los Angeles where being a blue-eyed blonde won’t make anyone bat a false eyelash.

Silver screen star by day, superhero by night, Arktos is a triple-threat. He can fly, freeze anything, and see glimpses of the future, all of which he needs to keep the city of Los Angeles safe, but which does nothing for his social life. When a frightening vision of an explosion leads him to rescue a damsel in distress, he finds himself trading Shakespearean insults with a rogue.

Angela knows just how dangerous well-intentioned superheroes can be: one tried to kill her family when she was young. Arktos knows he should hand the rogue over to Company justice; it’s not safe for someone like her to be in the middle of a fight.

But they can’t seem to stay apart. And together, they just might be able to melt all the obstacles standing between true love for a hero and a villain. 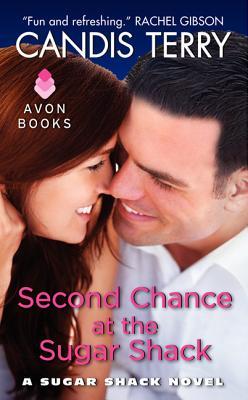 After that, it’s back to the world of small towns–in this case Deer Lick, Montana in Candis Terry’s Second Chance At The Sugar Shack.  I hadn’t even heard of Candis Terry before I heard her speak at RT this year, and since then I’ve plowed through all her Sweet, Texas series (book 4 cannot arrive fast enough), and now I’m going back to pick up her earlier work.  She’s earned a spot on my autobuy list with her appealing small town romances.  This particular one is, as the title implies, a second chance romance.  I’m only a couple chapters in, but loving it already.

Kate usually spends her days dressing Hollywood A-listers, but after her estranged mother dies she finds herself elbow-deep in flour in her parents’ bakery . . . in Deer Lick, Montana. She thought she’d left small-town life far, far behind, but it seems there are a few loose ends.

The boy she once loved, Deputy Matt Ryan, is single and sexy and still has a thing for her . . . and handcuffs.

Her mother, who won’t follow the white light, is determined to give maternal advice from beyond the grave.

And somehow Kate’s three-day stay has, well . . . extended. She never planned to fill her mother’s pie-baking shoes—she prefers her Choos, thank you very much. But with the help of a certain man in uniform, Kate quickly learns that sometimes second chances are all the more sweet.

What are YOU reading now?