I’m up to my eyeballs in the final stretch of my book, so I’m turning this over to three other writers who have captured the absolute effervescent joy I’m feeling over the Ole Miss and Mississippi State victories this past Saturday. 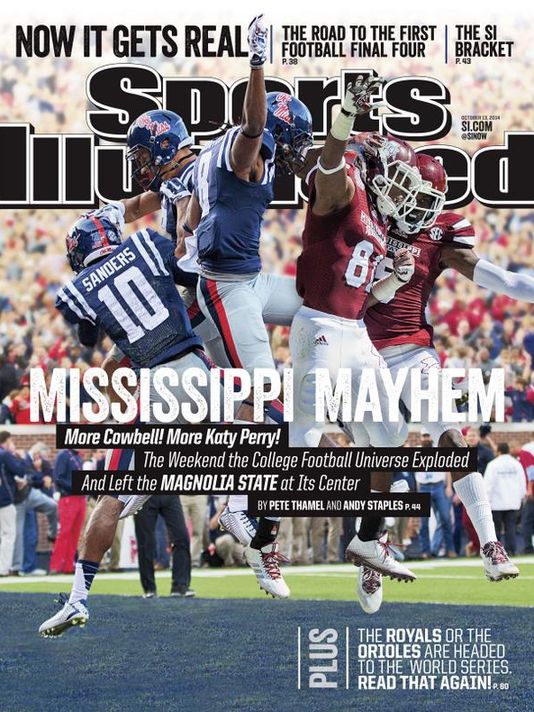 You didn’t get goose bumps from a late-morning Starkville din so loud it seemed set to jar loose the Mississippi-Alabama borderline and hurl it nearer Tuscaloosa. You didn’t hurry along 98 miles of mid-afternoon roads past cotton in a field and an armadillo on the roadside and a great big hush that gave way only to the very occasional lawnmower. You didn’t hear the early-evening roar that can stem from an Alabama kickoff fumble trickling across an Ole Miss field in a 17-17 strife.

You didn’t feel this whole fall turn all Mississippi on us.

It’s terrible to rub it in, but you didn’t witness a terrific Mississippi State quarterback named Dak carve up a Texas A&M defense until Aggies seemed to look at each other thinking, Why’d they put us in the SEC, anyway? You didn’t drive through West Point and Egypt and Okolona and Troy and Pontotac, or see the sign pointing to “Downtown Okolona.” (Whew!) You didn’t see the goal posts come down in Oxford or hear Ole Miss defensive end Robert Nkemdiche tell how a confident Ole Miss Coach Hugh Freeze told his players in pre-game, “Be sure to move out of the way when they tear the goal posts down.”…CONTINUE READING.

This will start out with one assumption, maybe two. One, most of you have never lived in Mississippi. Two, most of you are happy about that.

Now we’ll move onto one fact, maybe two. One, for the first time, the Ole Miss andMississippi State football teams are ranked in the top five of the Associated Press Top 25.

Two, I’m from Mississippi. And happy about that.

So I’ll forgive you for not understanding just how awesome this week is for my people back home, if you’ll forgive me for agreeing with those people — that yes, this is awesome. It’s awesome and it’s been a long time coming, and it’s beyond perfect that neither the Rebels nor Bulldogs have bragging rights because they are actually tied for No. 3 in the latest AP poll.  CONTINUE READING.

Lee Fitting has produced College GameDay for 11 years. He’s been intimately involved in planning and monitoring shows across nearly every major football campus in the United States.

Saturday was the show’s first visit to Oxford, Miss. Guest picker Katy Perry made quite a splash, and then the Ole Miss Rebels beat the Alabama Crimson Tide, ranked No. 1 in the Coaches Poll, in a thriller.

“This was the best on-campus experience I’ve been part of as Game Day producer,” Fitting said in an email to Sports Illustrated on Sunday night. “It wasn’t a show, it was an event, and it was because you have such a great natural character in The Grove. You have an incredible recipe – a picture perfect setting, with thousands upon thousands of people that all share an unmatched passion for their school, their team and their sport.

“The buzz throughout the weekend was awesome. There were times when the production truck was actually shaking. … It’s a place, and an event, that every college football fan has to experience in person.”

That’s a huge compliment coming from Fitting. Yes, it’s in his best interests to pump up the show and say good things about the schools that welcome ESPN. But that’s not your typical pat on the head.

Fitting also said GameDay, which is in Starkville, Miss., this week, could return to The Grove on Nov. 1 for Auburn-Ole Miss.

Saturday’s show — in between Perry’s corn dog tosses — focused on one of the most celebrated places to tailgate in the United States rather than the history of Rebels football…  CONTINUE READING.