So 50 Shades of Grey the movie came out last weekend.  Whether you love it or hate it, you cannot deny it’s become a cultural phenomenon.  There’s been a whole SLOUGH of fantastic posts about it.   Here’s a collection of my favorites.

Is Romance Devolving? 50 Shades vs. No One Puts Baby In A Corner: Kristen Lamb takes a look at how popular conceptions of romance seem to have changed.

Consent Isn’t Enough: The Troubling Sex of Fifty Shades: This is a long one but well worth a read as it delves into the sketchy nature of Ana’s consent (and is it really consent?) and talks about a lot of the issues raised by the story.

A Letter To My Children About Fifty Shades of Grey: This post talks about everything 50 Shades is and is not (it is NOT a love story, yo!)–starkly explaining exactly how Christian’s actions are Not Okay and should not be used as a model for acceptable behavior.

Does Fiction Matter?  Fiction, Fantasy & Social Change: Another one by Kristen Lamb talking about the power of fiction to enact social change (whether it’s trying to or not).

How “Strong Female Characters” Still End up Weak and Powerless (Or, “Do They Pass The Action Figure Test?”): This one by the ever thoughtful Chuck Wendig may be my favorite because he FINALLY puts a name to that niggling thing in my brain for exactly WHY I have such issues with books like Twilight and 50 Shades–the sheroes lack AGENCY.  Go read the article in total, but to bring up the issue on my mind, he defines agency as: 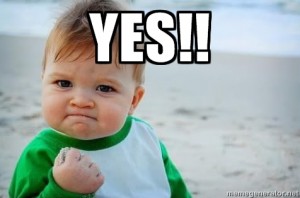 I admit, I had a total fist pump/light bulb moment when I read this because YES, this is exactly why I hated Twilight.  Bella is so much an observer rather than an active participant in her story.  She’s reactive rather than active.  From what I’ve read, Ana in 50 Shades is much the same (not a shock since it began its life as Twlight fanfic).  That’s not to say that either of these women never ACT, but as a whole, they are reactive and passive, letting the events of the plot happen TO them rather than BECAUSE of them.  Big Bang Theory pointed out that Indiana Jones totally falls into this trap too–pretty much NOTHING he does has any real bearing on the outcome (and, frankly, I’m not sure I can QUITE forgive them for pointing that out because I used to love those movies…).  There are a whole plethora of hugely popular romance series that I can’t stand because the sheroes fall into this trap and have no agency (I didn’t know this term before and now I’m going to be using it all over the place!).

But I admit, even with this yardstick in the back of my mind, I don’t always notice when things don’t measure up.  I went to see Jupiter Ascending a couple weeks ago and loved it (not a popular opinion).  I loved Michael Giancchino’s score, thought they did some cool stuff visually with the world-building and special effects, and I totally admit there was a whole lot of oh Channing Tatum is pretty and I really like watching him fight–sue me (and I can’t wait to see him as Gambit).  I wasn’t paying much attention to the agency of the shero.  It’s the kind of thing that might’ve popped for me on a second viewing or after further pondering.  Or not.  We’re so constantly bombarded with stories that don’t pass the Bechdel Test, Women in Refrigerators, and the Sexy Lamp test–all means of determining whether female characters actually are…you know…people–that even those of us who SHOULD notice often don’t.

The Bechdel Test in particular is one I think about a lot.  In a nutshell, it asks whether the story features at least two women who talk about something other than a man.  I first heard about this in the context of movies, and I was shocked at the number of movies that don’t pass it.  I write and read romance, so as soon as I read about this one, I started holding up some of my own work as a yardstick and finding that–yeah, not everything passed (some of this being because there were really narrow casts with mostly just the hero and shero and the bad guys and a lot of running for their lives, so not an occasion for the shero to even talk to another woman, let alone dish about a man).  I think it’s easier to overlook this kind of thing in a story where there’s a lot of action or where the shero can physically kick ass.  It feels like she’s DOING STUFF.  But often this is just window dressing and she’s just an action figure, still at the mercy of the plot (that’s almost always driven by men, whether it’s a romantic entanglement or not).

Looking back at Jupiter Ascending, it’s hard to clearly see how to write a shero with agency under those circumstances.  You’ve got a fish out of water story where she finds out she’s suddenly not what she’s always thought and she is, in a very real sense, at the mercy of others to help her navigate the universe into which she’s been thrust with no knowledge.  So much of the conflict in this story arises from the fact that she just flat doesn’t know this world and feels like she has to trust this or that person.  How do you give a character like that agency within that context?

This whole thing has been percolating in my brain, and I’ve been pondering the psychological and sociological ramifications of the ENORMOUS and, frankly, scary popularity of these non-female agency stories among women.  I mean, seriously, what does this say about our society?  I look at some of these popular series, analyzing and trying to understand WHY they’re popular (because we all want the Secret To Success, right?) and absolutely failing to get it.  IS their very popularity rooted in the shero’s lack of agency?  In this idea of some strong man coming in to take care of everything, tell her what to do, and allow her to NOT think about stuff (like bills and chores and kids and jobs and the million different things most women are called on to deal with in real life on a day to day basis)?  Do women actually fantasize about that abdication of responsibility?  Is that the appeal?  If it is, that’s definitely not my target audience and not at all the kind of book I’m likely to ever write.  Which is fine.  To each their own.  But really, I’m trying to understand.

So sound off in the comments, y’all.  I want to know your thoughts on this.

3 thoughts on “Why The Popularity For Sheroes Without Agency?”