Updated: OMG, I have been trying to get this post written for two days! 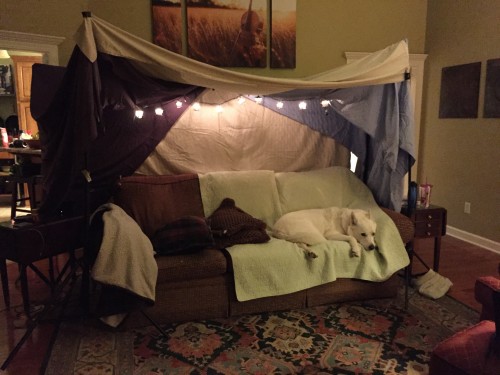 I don’t know what it is about holidays that just pull me totally out of routine for DAYS.  We were closed for MLK Day on Monday.  I spent THE ENTIRE DAY in my JAMMIES.  I can’t remember the last time I did that when I wasn’t sick.  It was pretty fabulous.  The blanket for was still up from girl’s night on Friday (because this is how we chose to watch Sense and Sensibility in honor of the passing of Alan Rickman </3) and I spent the whole day camped out in the living room by the fire.

The writing has been going well.  I probably won’t quite finish this novel by the end of January, but I’ll be close.  I’ve cranked out 12.7k since my last check-in (which was Sunday before last).  A bit lower than I wanted, but I had stuff going on and needed to figure some plot stuff out.  All in all, I think this draft is going pretty well.

I’m in a mode for re-evaluating covers at the moment.  I did some playing around with cover options for Just For This Moment over the weekend, and was messing with Know Me Well, which I’ve never been happy with.  It doesn’t fit with the rest of the series.  I was operating on a shoestring last year financially and wasn’t able to hire my original cover designer.  Now that things have picked up, I think I’ll be rectifying that.

I was supposed to be traveling to Natchez for work today (because it’s now THURSDAY…where has the week gone?) but that just got cancelled due to the fact that they are apparently supposed to be having a literal blizzard type storm in south Mississippi tomorrow.  SNOWPOCALYPSE.  Preceded by a bunch of tornadoes and hail today.  Yay. Not.  Of course, probably we won’t get more than flurries here and not get out of work…because that’s almost always how it works.  I just want one snow day.  Is that too much to ask?

Anyway, just as well I’m not having to travel and figure out how the heck to eat on Whole 30.  I’m on Day 18.  Over the weekend, I finally made the executive decision to allow myself one cup of tea a day as I like it.  A lot of Whole 30 is learning what foods are problematic for your body.  I already know that what goes in my tea doesn’t bother me.  I did the full elimination diet for allergies a couple years ago.  Since I’ve been drinking tea for nearly 20 years and I know perfectly well I’m not going to STOP drinking tea, now that the caffeine withdrawals are over with, it didn’t seem worth NOT drinking it.  Especially since my weight loss had stalled out because I was compensating for not having it by over-eating a bunch of other stuff (which totally didn’t satisfy the craving).  So.  Tea.  And the scale is moving in the right direction again.

Since I’m in the office today, I have a bunch of paperwork to catch up on.