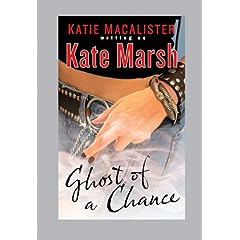 Last night I finished reading Ghost of a Chance written by Kate Marsh (aka Katie MacAlister).  Pretty much anything Katie writes is on my automatic buy list because chick cracks me up.  It’s the snark I love about chick lit but with way more entertaining plots.  I’ve read her contemporaries (actually started with Men In Kilts) and all of her paranormals.  So when I heard that she was branching out under a new pseudonym to write paranormal mysteries, I had to check it out.  I bought it on the day it came out, then promptly allowed it to get buried in my TBR pile until last weekend.   I certainly wasn’t disappointed.

The book had the same snarky voice I love, and Karma Marx was an engaging heroine, whom I look forward to following over books to come.  Honestly, it didn’t seem that much different from the rest of her paranormals, though perhaps there were some darker themes and a shorter timeline.  I don’t think Katie’s regular readers are going to be particularly squicked by the genre change (particularly, as Katie isn’t stopping her ragingly popular Guardian books or the Dark Ones novels).   But anyway, it’s got me thinking about authors who switch to write something different.

Another popular example would be Nora Roberts and her futeristic romance following Eve and Roarke, written as J.D. Robb.  That was a bit different, the whole following of the same couple through oodles of books (and frankly, I am astonished that she manages to continue to make them and their relationship interesting after all these books).  That’s a change from the trilogies and stand alone titles where we got a romance per book.

In both these cases, everybody KNOWS that J.D. is Nora and that Kate is Katie.  They’ve branded themselves so that fans will know what they’re getting into by which psuedonym they’re picking up.

But what about authors who don’t do that?  Those authors who write one thing for a while, build up a following, and then completely change horses and genres while keeping the same name.  I’ve been racking my brain trying to think of an example of this, and right now I just can’t come up with one.  Oh, what about John Grisham?  He made his name with legal thrillers, then branched out with books like The Painted House, which I’ve not read, but I’m told is more literary.  Is that a betrayal of readers?

I think there’s a certain level of expectation we have when we pick up a particular author.  We want a particular experience.  And if that author has decided to go off in a new direction, some readers might feel cheated.

So weigh in folks.  Who are your favorite authors who’ve written in multiple genres?  Do they use the same name in all or do they have multiple branded names?