Down in the south we have a deli chain that started in an old gas station in Oxford, MS.  MacAlister’s.  This place was a college staple of mine since it was only about a mile and a half from campus.  In addition to the usual deli fare of sandwiches and salads, they have a line of ginormous stuffed baked potatoes.  My favorite was taken off the menu years ago.  It was called the Big Spudinski and was loaded with keilbasa sausage and cheese.  Tonight I decided to do an adaptation of this potato using bacon and gouda (because that’s been the theme of the week if you’ve been paying attention) in addition to some smoked turkey sausage.  The end result was a delicious and incredibly filling weeknight supper that came out to around 720 calories per tater. 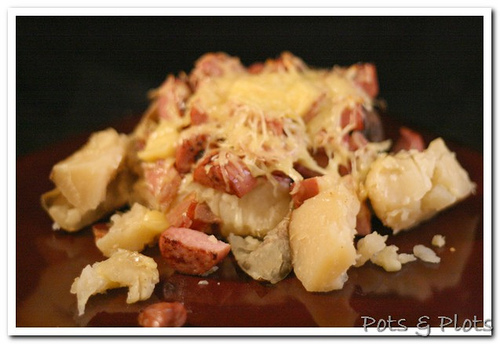