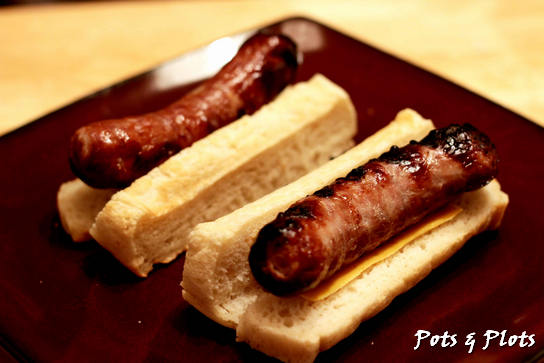 A few weeks ago, I blogged about Jeanne’s fabulous hamburger buns, which have been a life-saver since we went gluten free.  The next logical step in that chain was to find a way to make hot dog buns.  Well Jeanne was kind enough to point me to the New England bun pan from King Arthur Flour.  I wound up finding one on Amazon for a bit cheaper and it came in last week.  I used the exact same recipe as for the burger buns, but double quantities to fill the pan.  I baked it the same amount of time, then turned it out on a cooling rack.  Once it was cool, I sliced them into individual buns (you slice along the grooves that bake in from the pan), then I popped the individual ones back into the oven at about 250 degrees for 10-15 minutes, to sort of crust up the sides.  Then it’s back to the cooling racks.  After that it’s important to CAREFULLY slide down the middle but not all the way through, using a really good bread knife.  As you can see, they look a little funky, and they are a bit on the small side for bratwurst (which are what you see here), but hubby declared they taste fantastic and they are a suitable sausage/hot dog receptical (ok that sounds really wrong somehow). And they freeze really well, which is good because who uses 10 hot dog buns at once unless you’re feeding a LOT of people.