I feel compelled to start with Operation GIT because I am DOWN  2.5 pounds since last Monday, despite a few dietary indiscretions (like wiping out the box of Millionaires I ended up with from the office Dirty Santa).  WOO!  One more pound and I’ll have undone Christmas.  And then I can begin the S’rs Biznis of carving off the weight that crept up since hubby broke his leg (uh, yeah, that was back in 2010).  I have faith that my new Spartacus Workout DVD set will help with that (and yeah, I confess, my butt is quite sore this morning…It’s all in the name of filling out the Sexy Butt Jeans!).

On the writing front, the Pink Hammer has finished with DOTH.   I am tending my wounds and in the midst of mass planning for Revision Hell.  It has become abundantly clear that I lost all objectivity with this book (as all writers tend to do) and have not sufficiently internalized the Hammer such that when she’s not around to poke and prod and ask me the hard questions…I wasn’t asking them of myself.  But we’ve nailed down the thrust of the necessary character arcs, and figured out the theme.   Or I should say that Susan figured out the theme because theme is one of those things I spent my life believing English teachers made up to torture us and ruin otherwise decent books.  But apparently I do actually write it in, whether I realize it or not.  And this book, this theme, is…well it’s just damned funny.  Because the theme she identified is:

Control is an illusion.

Susan is having kittens over the irony of this.  That I, Miss Must Be In Control Of The World and Has Panic Attacks Without At Least Plans A-G and Preferably H-Z As Well, just wrote a book about how control is merely an illusion, how you can take charge but you’re never REALLY in control.

Just the idea of it is making me twitch.  But maybe I’ll learn something.

In other news, Riven is going quite well.  I’ve been managing around 1k a day on most days I’ve written.  I had to do a bit of surgery to my outline last night as I realized (due to the intensive re-education I’ve been getting with DOTH) that I’d screwed a few things up and did not have sufficient active goals in some of the middle scenes.  So I spent a couple hours hammering out some details, figuring out what kind of action best served the story, filled in a few holes of some details I needed to know, and came up with a location for some more Candy Bar-Easter Egg-World Reveal scenes, kind of like Olaf’s shop in Devil’s Eye.  This is giving me an opportunity to really show (and invent!) some new stuff about the Mirus world, and it’s been damned fun to come back to this after so long away. 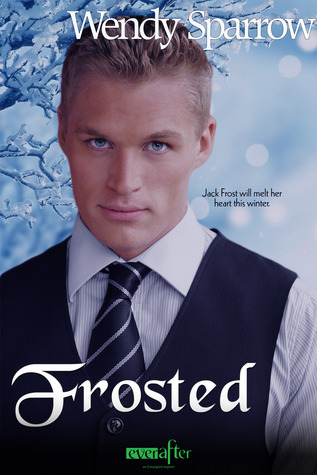 Last but not least, Happy One Day Late Book Birthday to my pal Wendy Sparrow!  Her paranormal romance novella Frosted just released yesterday from Entangled.  I started it this morning and it’s a fabulous, funny read about the woman who’s technically married to Jack Frost.  Here’s the blurb:

After falling through the ice one cold day, Kate is saved by a mysterious man named Jack and ends up marrying him. Come to find out she’s committed herself to the king of winter himself. Now Kate has cold feet about their life together…and cold everything else.

She doesn’t think Jack will miss her if she packs up and runs away to Colorado. After all, she’s been in living in sunny Florida for seven years, and he hasn’t managed to come see her. But Jack has one last chance of convincing his runaway bride to come back to him, and he won’t give up until he breaks through the ice that’s frosted her heart.

It is a very reasonable $2.99 and a well-timed winter read.  Go forth and by it!