I make no secret of the fact that I am a food snob.  Or the fact that I really like to eat.  So when I think of Lean Cuisine, the first word that comes to mind historically is DISAPPOINTED.  They never ever look as good as the picture on the box.  The portion sizes are miniscule and hold me over for about half an hour.  And the food itself was usually fairly tasteless and unimpressive, often with a rubbery, overcooked texture that I have come to expect from a microwave dinner.

But I’d been hearing noises about the Chef’s Pick collection.  This is a thing the last few years with the insane popularity of the Food Network and the Cooking Channel.  People bringing in chefs to overhaul their food and raise the bar for what people expect.  So when the opportunity came up through the Tastemakers program to try some of Lean Cuisine’s new Chef’s Pick dinners, I signed up.

It took me a while to find them in my local Walmart.  We have gobs of Lean Cuisines but only ONE SHELF (out of about 10) of the Chef’s Pick options.  Sadly MOST of the ones I’d wanted to try weren’t here.  Small town, what can I expect.  But I did pick up the Chicken Marsala and the Ranchero Braised Beef. 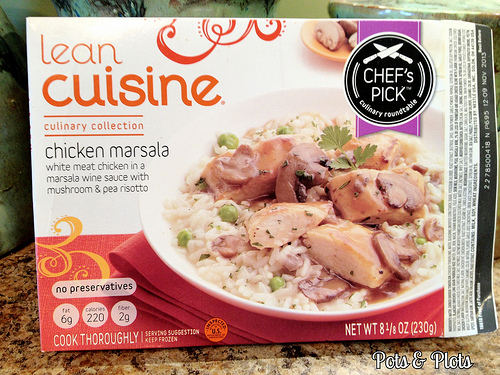 First, the chicken marsala.  As you can see from the box, this is a beautiful dish in its base form.  I know something about staging and food photography and this is something Lean Cuisine actually has always done well…making what’s supposed to be in the box LOOK appealing.  But hint hint.  This thing is only 220 calories and 6 grams of fat.  That dish you see there is about the size of a saucer from a tea set.  Again, this is expected.  It’s part of that restricted calorie thing.  But what about what’s inside the box? 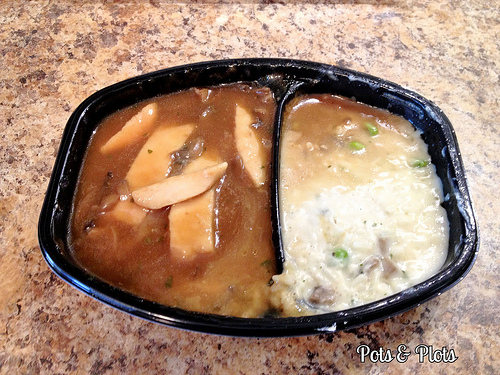 Um, yeah…this is not what the picture looked like.  Not really anything they can do about that.  It’s part and parcel of the whole microwave dinner phenomenon.    So I grabbed a salad plate and scooped it out in an effort to see if I could, in any way, replicate the picture. 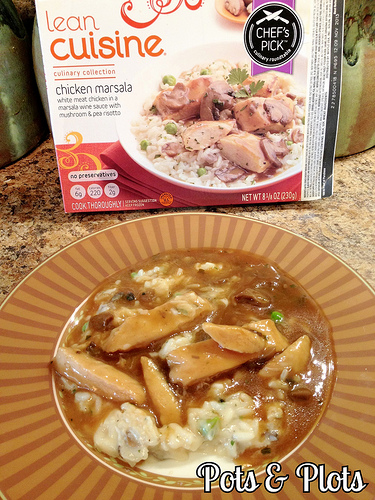 Clearly there’s WAY more gravy in this box than they used in the shoot, and I’m fairly certain there was more risotto in the shoot than is in the box.  But I’m not really grading them for presentation.  I do not expect to eat a frozen dinner with my eyes first.

So what about the most important question: How did it taste?

I was…shocked.  This was truly delicious.  I had no idea it was possible to pull chicken out of the microwave that was this moist and flavorful.  The flavor combinations tasted fresh and very, very appealing.  The portion size is still only enough to feed a half starved pixie, but pair it with a big green salad or another veggie and you might actually have a solid lunch. 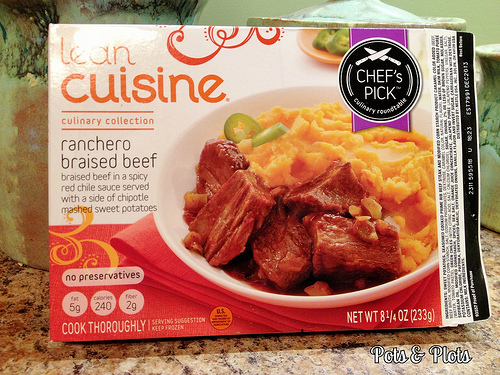 Now for the Ranchero Braised Beef.  Same kind of thing. Pretty on the box. 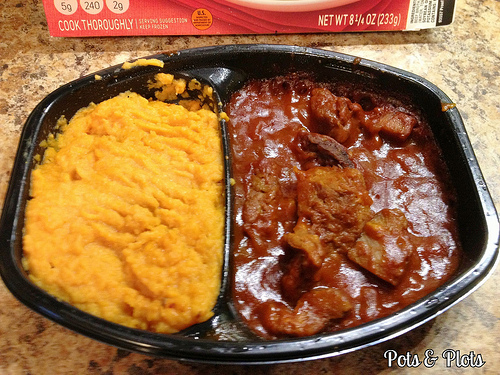 Not so much on the inside. 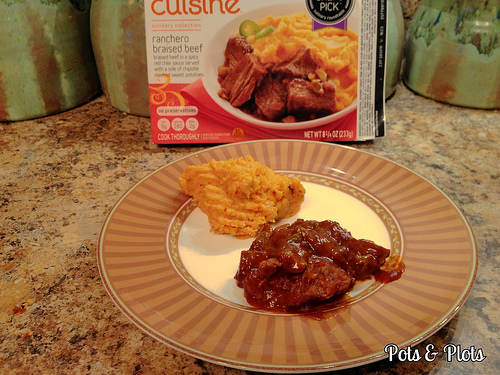 Tiny portions, though a bit more filling than the chicken marsala.

The flavor here wasn’t bad.  I really enjoyed the chipotle mashed sweet potatoes (I love the combination of chili powder with sweet potatoes in general).  The beef didn’t fair quite as well as the chicken in the reheating department, though it still was better than such things usually are in a frozen dinner.  I didn’t find this over spicy, though some people might.  There are no jalapenos in the box, in case you were worried.

The verdict:  I think Lean Cuisine has really upped their game with this line.  Much better flavor, much better texture and quality of food.  Kudos for that.  My only gripe is that it’s not enough food for me.  Never has been.  This is a snack, not a meal, IMO.

Disclosure: I have partnered with Lean Cuisine through DailyBuzz Food to help promote their new line of Chef’s Pick products. I have been compensated for my time commitment to work with this product. However, my opinions are entirely my own and I have not been paid to publish positive comments. Thank you Lean Cuisine!