In lieu of my usual 3 awesome things post, I am today posting about ONE VERY awesome thing.  I am very pleased to welcome today Angela Smith, heroine of Even Villains Go To The Movies (follow up, to the delightful Even Villains Fall In Love, which I talked about here).  She graciously agreed to an interview, so without further ado…

You’re the child of America’s Superhero Sweetheart and the Number One Super Villain—obviously that’s a tough place to be.  How did that impact your decision to leave teaching and go rogue? I love my parents dearly, so let’s start there. I have the best parents in the world. They did everything they could to raise us right, but I never felt like hero material. And to be honest I don’t think I’m cut out to be a villain. Even a “nice” villain like Daddy has to have a bit of a mean streak. I could never be as good as my parents were, so I decided to do something neither of them were good at. … In retrospect I probably should have taken up flower arranging.

Are you Daddy’s Girl or Mama’s Sweetie? Team Mom! I think Blessing is probably Mom’s favorite, and Daddy spoils us all equally, but I look just like my mom. I’m definitely Mama’s Sweetie.

You grew up as one of four kids—did that ever leave you wishing you were an only child or are you tight with your sisters? There’s actually five of us, we have a baby brother who’s nearly six years younger, Gideon. And we’re… normal. Not super tight, but I don’t think we fight more than an average family. I know that if I really need my sibs, they’ll have my back. I just don’t ask for much help because my sisters can be a little over-protective and they don’t know the meaning of the word OVERKILL.

Do you like your particular set of powers?  Or did you ever have power envy for one of your sisters? … you’re trying to get me in trouble, aren’t you?

I… how am I supposed to answer that? My sisters can unlock everything, make people tell the truth, teleport, shoot lightning, and use telekinesis! Of course I’m jealous! I also want to fly like my mom and throw ice around like my husband. They all are so independent… but … I’m happy with who I am too. I can’t leap tall buildings or shoot lasers out of my eyes, but I can make calculus cool, and not many people can do that!

So what does Dear Daddy Dr. Charm think of Arktos?  I bet he had some unique means of intimidating your dates growing up. My dating history is classified. We don’t talk about it. Ever. I’ll borrow the Agree-With-Me-Ray and make you forget you ever asked!

Daddy really likes Arktos, I think. He respects a man who can admit he’s in love. You’ll see in the book. Daddy is a romantic at heart, don’t ever let him convince you otherwise.

What’s your favorite classic superhero (or villain) movie and why? The X-Men cartoon… my parents had it on DVD in the box set, the ones where they wore bright blue and yellow. Jubilee reminds me so much of Maria when she was young! And I totally wanted to be as cool as Jane Grey when I grew up.

Marvel or DC? Don’t make me choose. That’s like asking me what kind of chocolate is best.

And you know, I’m a super busy woman.  Do you think you could put in a good word with your dad to maybe help me out with some minions? Sure thing! You may regret that, but I’ll ask him for you.  🙂

THANK YOU for visiting, Angela! 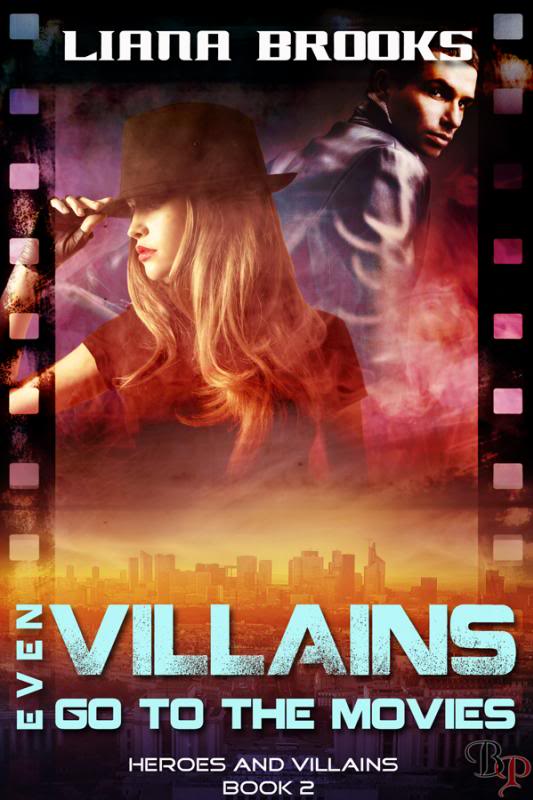 When your mother is America’s Superhero Sweetheart and your daddy’s the Number One Super Villain, you grow up feeling a little conflicted.

Angela Smith has superpowers—nothing that will ever make her comic-book famous—but her ability to psychically sense and manipulate the emotions of people around her has drawn unwanted government attention. Forced to choose between her quiet life as a teacher under constant surveillance or the life of a rogue, she chooses the latter. She plans to hide out in sunny Los Angeles where being a blue-eyed blonde won’t make anyone bat a false eyelash.

Silver screen star by day, superhero by night, Arktos is a triple-threat. He can fly, freeze anything, and see glimpses of the future, all of which he needs to keep the city of Los Angeles safe, but which does nothing for his social life. When a frightening vision of an explosion leads him to rescue a damsel in distress, he finds himself trading Shakespearean insults with a rogue.

Angela knows just how dangerous well-intentioned superheroes can be: one tried to kill her family when she was young. Arktos knows he should hand the rogue over to Company justice; it’s not safe for someone like her to be in the middle of a fight.

But they can’t seem to stay apart. And together, they just might be able to melt all the obstacles standing between true love for a hero and a villain.

And there is a Rafflecopter giveaway! (Click to check out deets….the widget won’t work on my blog).

Liana Brooks would like to SCUBA dive Europa (that moon around Jupiter), but with the NASA shuttle program shut down she’s resorted to writing science fiction instead.  She likes southern beaches, warm weather, sharks, and striped socks. Her superhero romance series started with EVEN VILLAINS FALL IN LOVE and continues with EVEN VILLAINS GO TO THE MOVIES. For those who prefer their romance without a side order of spandex she’s written PRIME SENSATIONS (part of the Tales From the SFR Brigades anthology) and FEY LIGHTS.

One thought on “Liana Brooks’ Even Villains Go To The Movies: Interview”