We live on a hill.  There’s a privacy fence running all around the back yard, but because of said hill, we can easily see over it from our back porch and into our back neighbor’s yard.  This gave us a bird’s eye view of their project last weekend–which was to build an epic deck off the back of their house.  The back of their house is laid out very much like ours…small covered space, which they had previously enclosed.  They knocked that down and extended the deck out into a great entertainment space, complete with a new patio set and some cute decorative stuff.

Now we have no need of a deck.  Our house has a long, wide extension of the concrete patio, so we’ve got the space already.  But right now, we are the people in the neighborhood who have weeds as tall as me.  I’m allergic to all of it, plus we totally bypassed spring and jumped straight to summer, so I haven’t had any inclination to get out and deal with them (maybe on Memorial Day, since I’m off).  I did, earlier this spring, hose off the back porch and put down an outdoor rug, clean off the grill (which we use all the time), and clean the outdoor furniture–but in general I haven’t done anything else. 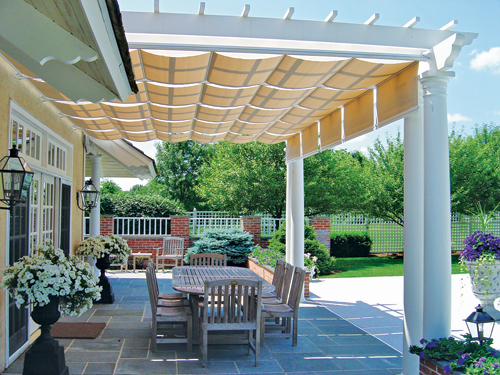 If money were no object–well, okay, first off, I’d hire a yard crew to deal with the jungle that is our flower beds.  We are to the point where we may need the Green Berets to hunt up the actual legitimate flora buried under the weeds and vines.  But anyway, if money were no object, I would totally build an attached pergola off the back, stretching to the edge of our patio–the kind with those nice drapes of sailcloth for shade.  Maybe with a swing.  And twinkle lights.  And a nice pretty new patio set rather than the motley crew we’ve cobbled together. 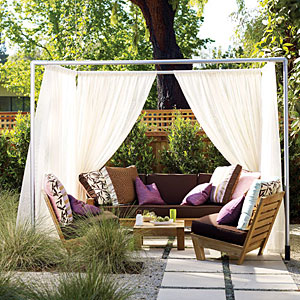 Maybe eventually we could do something like this easy DIY cabana.  And there seem to be instructions for creating a PVC pergola (multiple versions) (though I can’t find any pictures).

As money is totally an object and my budget runs more toward a few cans of spray paint to update said motley crew and using stuff I already have, I’ll have to be more creative.  I’ve been haunting Pinterest for backyard DIY projects.  Of course, just cleaning up all the weeds will help tremendously.  Emptying out my existing pots and planting something pretty (and hardy since I’m awful about killing things).  I might use some tomato stakes or bamboo to make custom trellises (or maybe just inverted tomato cages) for some Carolina jasmine.  I definitely need to clean off the ceiling fan out there because–ew.  Dirt and spider webs.  We’ve got a lovely big yard flag with our last initial on it that was a gift–I totally want to hang that.  I’ve got a gigantic canvas tarp I bought for a failed shade project last year.  I might turn that into some outdoor curtains to shade part of the porch.  Shade is definitely an issue.  I do have a pretty big green umbrella and stand.  I really wish our current patio table had a hole in the middle for an umbrella. 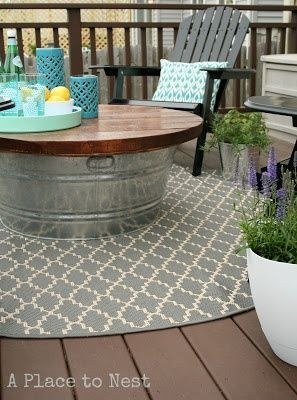 I could totally make a bucket table.  One of the things we’ve acquired is a big pretty marble table top…hmm, I wonder if the galvanized bucket we aren’t using for the dogs is sturdy enough to hold it…That would fit in front of our hand me down glider.  And there’s that wee side table my mom found somewhere or other at a garage sale or something.  Plus I’ve got fabric out the wazoo to make cushions and pillows and such.

I’ve got the STUFF to make something–the thing I DON’T have is time.  But maybe I’ll do some of this for a project when I hit the dig out stage, once Know Me Well is out to my editor.

Excuse me, I have to go perform a self intervention to get myself off of Pinterest again.