Chicken rotel is one of my favorite comfort foods.  It is addictive and wonderful and disappears at the speed of light in our house.  So much so that the first four times I made it, I didn’t get a picture made.  Well, I’ve been on a restricted calorie diet this last week or so as I’ve geared up for another round of The Biggest Loser on Wii, which meant that I was starving and had fewer calories to use toward filling me up.  And naturally I was really, REALLY craving chicken rotel. So I set out to lighten up my original version to fit in my calorie restrictions, while still giving me the ridiculously huge portion that I expect with this dish.  The original version worked out to 5 servings at 644 calories, 17 grams of fat.  This version makes 4 GIANT servings at 607 calories and 15.75 grams of fat.  The secret?  Load it up with veggies, cut down a bit on the liquid, and cut down on the pasta, but do it in a sneaky way that picky eaters won’t notice.  When I served this to my husband (i.e. Mr. Picky), he said “This is better than it was last time.  What did you do different?”  That’s right!  You heard it here!  Mr. I Don’t Like Vegetables LIKED THE VEGGIED UP VERSION BETTER!  Somebody contact CNN! 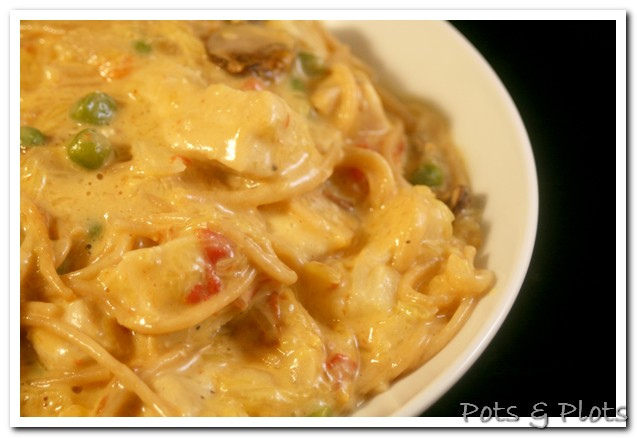 One thought on “Lightened Chicken Rotel”